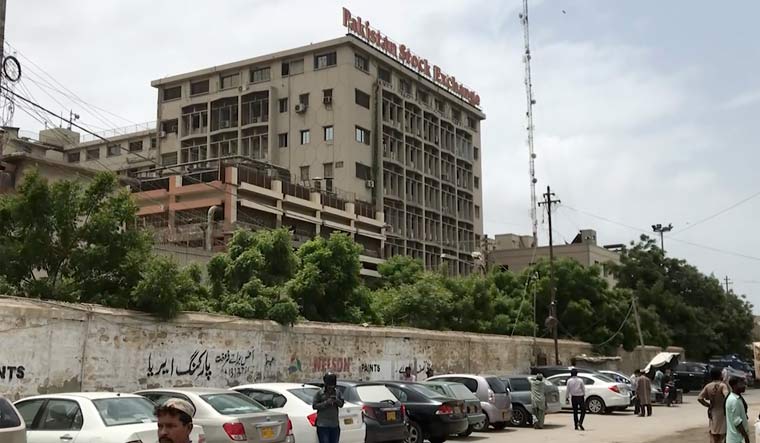 The exterior of stock exchange building in Karachi | Video grab/AP

The Baloch Liberation Army (BLA) is believed to be behind the terrorist attack on Karachi Stock Exchange in Pakistan this morning that killed at least seven people. The BLA has claimed responsibility for the suicide attack on Twitter, according to agency reports.

Their post on Twitter, reports claim, identified the four attackers—who have been killed—as Tasleem Baloch, Shehzad Baloch, Salman Hammal and Siraj Kungur and part of the elite “majeed brigade’’. However, no BLA spokesperson has so far come forward to reiterate the claim.

The BLA has stepped up its activities in the past two months. In May, it killed six Pakistan army soldiers including an officer in a landmine blast in southern Balochistan. The officer, Major Nadeem Abbas Bhatti, was targeted by the BLA, as he was “directly involved in the formation and leading of so-called death squads of criminal gangs operated by the army”, a BLA spokesperson has been quoted as saying.

The Karachi Stock Exchange blast, if the BLA is indeed behind it, is certainly an attempt to get noticed. Formed in 2000, the BLA came into prominence, according to a study done by Stanford University, when it claimed responsibility for a bomb blast in a market in Quetta. Seven people were killed and 25 wounded in the attack.

The Baloch cause shot into prominence when a plane with a banner "Justice for Balochistan", asking for probe into enforced disappearance of Baloch activists in Pakistan, flew over the Headingley cricket ground during a Pakistan-Afghanistan match in 2019.

While the BLA recruits young political activists, it could be also seen as a “resurgence’’ of the old armed resistance in the 1970s.

“The BLA strives for the creation of a sovereign state of Greater Balochistan, which would include Pakistan, Iranian and Afghanistan Balochistan territories,’’ the Stanford report stated. “The group has continually demanded that the Pakistani government invest greater economic resources in the region and stop exploiting Balochistan’s natural resources.’’

It is no surprise then that the BLA has chosen to target economic developments in Baluchistan, especially the China-Pakistan Economic Corridor. The BLA has been held responsible for several attacks, according to Pakistani security agencies, including a suicide attack in August 2018 that targeted Chinese engineers in Balochistan, a November 2018 attack on the Chinese consulate in Karachi, and a May 2019 attack against a luxury hotel in Gwadar, Balochistan.

The BLA was proscribed by the US State Department in 2019 as a Specially Designated Global Terrorist outfit. The move to put the outfit in the terror list came just on the eve of Prime Minister Imran Khan’s first visit to America. And was largely seen as a goodwill gesture to set the mood for President Donald Trump’s first meeting with Khan. America needs Pakistan for its clout with the Taliban—which was essential in 2019—to push them on to the negotiating table.

The State Department described the BLA as “an armed separatist group that targets security forces and civilians, mainly in ethnic Baloch areas of Pakistan''.

Pakistan has chosen to blame an Indian hand for the unrest in Balochistan. It has tried to link Kulbhushan Jadhav as a RAW agent, and succeeded in it a little. Prime Minister Narendra Modi mentioning Balochistan from the Red Fort helped keep the conspiracy alive. Pakistani news portals have already started flashing that the BLA has India links.

India has strongly denied any links. Despite the mention of Balochistan, India has done little diplomatically to help the Baloch cause. An asylum request by Brahamdagh Khan Bugti, the founder and leader of Baloch Republican Party, who is now in Switzerland, is yet to be processed. Nor, has India, chosen to bring up the brutal suppression on Baloch activists on an international forum.

The Baloch resistance in Pakistan has a long and bloody history. Recently, the body of Sajjid Hussain, editor of the online magazine Balochistan Times, was found in a river. Hussain, who had been in exile in Sweden since 2017, went missing on March 2, and was found dead in May 1.

The matter is being probed but the needle of suspicion—experts claimed—pointed to the Pakistani agencies.

Forced disappearances and a history of human rights violation by security agencies have been well-documented by Human Rights Commission of Pakistan in a fact-finding report of 2019. The International Voice for Baloch Missing Persons claims 18,000 Baloch people are currently unaccounted for, of whom more than 2000 were killed between 2001 to 2013.

"I am announcing this with a heavy heart that our party is ending alliance with the PTI. But it's a reality that the government has not fulfilled even a single promise it had made with us, during the last two years," Akhtar Mengal, BNP chairman was quoted as saying. The agreement, according to Mengal, included release of the missing persons, as well as more allocation for Balochistan. This puts Khan’s number of seats at 180.