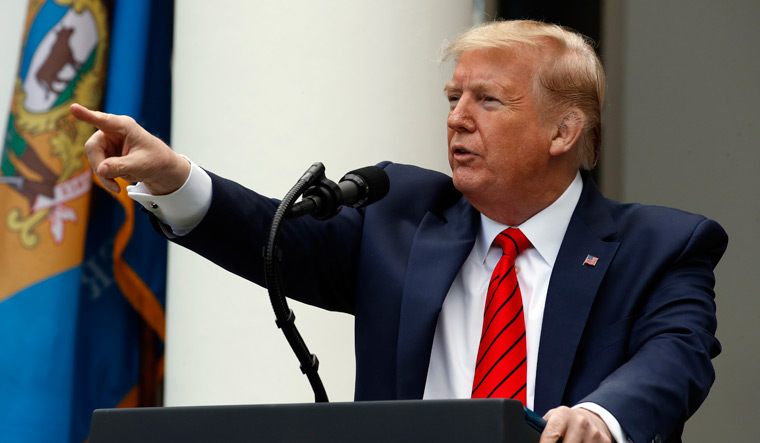 The order comes a day after Trump accused Twitter of election interference, after it added fact-check links to two of his tweets.

"Today I'm signing an executive order to protect and uphold the free speech and rights of the American people. Currently, social media giants, like Twitter, receive an unprecedented liability shield based on the theory that they're a neutral platform - which they're an editor with a viewpoint," Trump told reporters after he signed an executive order on Thursday.

The executive order calls for new regulations, under Section 230 of the Communications Decency Act, to make it that social media companies that engage in censoring or any political conduct will not be able to keep their liability shield. "That's a big deal. They have a shield; they can do what they want. They have a shield. They're not going to have that shield," Trump asserted.

This authority resides in Section 5 of the Federal Trade Commission Act, he said.

Trump also said he was directing the Attorney General to work cooperatively with the States.

"He's going to be working very much and very closely in cooperation with the states to enforce their own laws against such deceptive business practices. The states have brought in powerful authority to regulate in this arena, and they'll be doing it also and we encourage them to do it - if they see exactly as we've been seeing," he noted.

The President said that a handful of powerful social media monopolies controlled a vast portion of all public and private communications in the United States.

"We know what they are; we don't have to name them," he said.

These social media outlets have had unchecked power to censor, restrict, edit, shape, hide, alter virtually any form of communication between private citizens and large public audiences, he said.

"There's no precedent in American history for so small a number of corporations to control so large a sphere of human interaction. And that includes individual people controlling vast amounts of territory," he said.

Asserting that his administration can't allow that to happen, especially when they go about doing what they are doing, because they are doing things incorrectly.  "They have points of view. And if we go by that, it's actually amazing that there was a success in 2016. But we can't let this continue to happen. It's very, very unfair," he said.

"This censorship and bias is a threat to freedom itself. Imagine if your phone company silenced or edited your conversation. Social media companies have vastly more power and more reach than any phone company in the United States. More reach, actually, than your newspapers, by far. More reach than a lot of your traditional forms of communication," Trump said.

He said he is directing his administration to develop policies and procedures to ensure taxpayer dollars are not going into any social media company that repress free speech.

"The government spends billions of dollars on giving them money. They're rich enough. So we're going to be doing none of it or a very little of it," he said.

"As president, I'll not allow the American people to be bullied by these giant corporations. Many people have wanted this to be done by presidents for a long time. Now we're doing it. I'm sure they'll be doing a lawsuit, and I'm also sure that we're going to be going for legislation, in addition to this. The legislation will start immediately," said the president.

Earlier in a press briefing, White House Press Secretary Kayleigh McEnany said that it was time to, quote, "get the facts" about Twitter and other social media platforms targeting their bias against President Trump and conservatives online.

"Twitter's head of site integrity has tweeted that there are, quote, 'actual Nazis' in the White House, and no fact-check label was ever applied to this absolutely outrageous, offensive, and false claim made against the White House and its employees," she said.