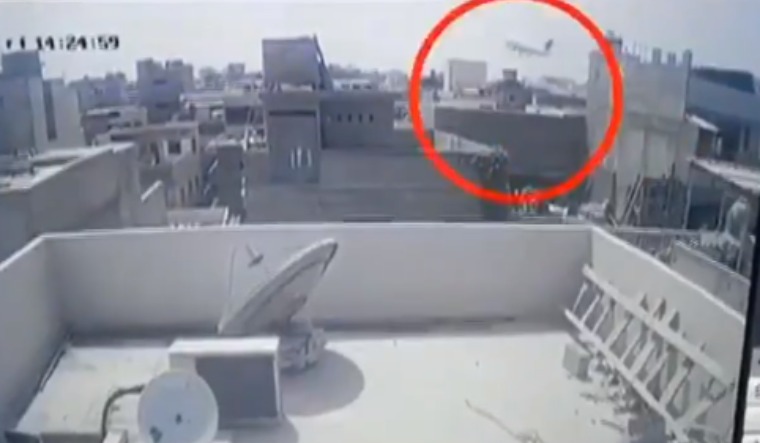 Screengrab from the CCTV footage of the PIA crash | Via Twitter

Pakistan is in shock over the crash of an Airbus A320 aircraft of Pakistan International Airlines in Karachi on Friday, that has left 97 people dead and dozens on the ground injured. The PIA flight was flying from Lahore to Karachi and crashed when attempting to land.

Late on Friday night, social media users tweeted footage of the crash from a CCTV camera at a house in the Model Colony of Karachi, where the PIA jet crashed. The video, which is less than 20 seconds long, shows the aircraft descending rapidly before going out of sight, following which a plume of smoke erupts into the sky.

Two passengers on board PIA flight PK8303 survived the crash. Pakistani media agencies reported that the pilot of PK8303 informed the ATC that he had "lost two engines" shortly before declaring an emergency. The A320 is a twin-engine aircraft. The chief of PIA said the exact cause of the crash would be found after a transparent investigation.

The crash of PIA flight PK8303 has led to demands by the country's pilots association for involving international investigators in the probe into the crash of PK8303. Pakistan's Dawn reported on Saturday that Pakistan Airlines’ Pilots Association (PALPA) wanted the International Civil Aviation Organisation and International Federation of Air Line Pilots’ Associations to be included in the investigation.

“These are the unfortunate incidents, which PALPA strives to avoid by following internationally acknowledged air safety rules to make Pakistani airspace safest for flying. Unfortunately, PALPA has always faced criticism for demanding safety procedures and highest technical upkeep of aircraft and following international safety rules and regulations. Very recently, PALPA was a target of hate campaigns by vested interests just because it wanted to follow stringent safety rules and regulations," a functionary of PALPA told Dawn.

The flight was coming from Lahore to Karachi after the Civil Aviation Authority (CAA) allowed limited resumption of domestic flights last Saturday following weeks of lockdown due to the travel restrictions linked to the COVID-19 outbreak.

This is the first major aircraft crash in Pakistan after December 7, 2016, when a PIA ATR-42 aircraft from Chitral to Islamabad crashed midway. The crash claimed the lives of all 48 passengers and the crew.