Kavaan, a 29-year-old elephant from Sri Lanka spent years in captivity in Pakistan 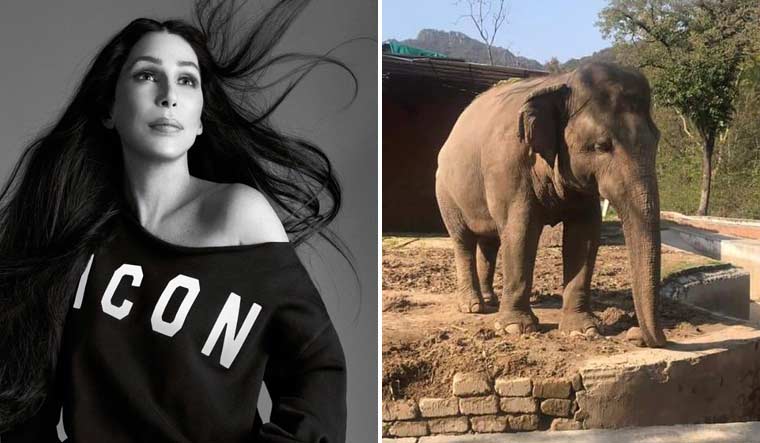 Singer Cher helped play up the movement to relocate the elephant 'Kaavan' from the Islamabad Public Zoo | Images via Twitter handles of Cher, Friends of Islamabad Zoo

Cher's hit song with Sonny, “I got you Babe,” will not be out of place in her love story with the loneliest elephant in Islamabad. Her tweet “I wish to thank the Pakistani government'' (heart emoji) late on Wednesday night went viral.

I WISH TO THANK THE
PAKISTANI GOVERNMENT❣️

“THIS IS ONE OF THE GREATEST MOMENTS OF MY LIFE. CAN'T STOP BEING SICK 2 MY STOMACH'' tweeted Cher in a tweet littered with emoticons including a crying smiley to show that tears were running down her cheeks. Her 'thank you' tweet, however, confused Pakistanis. Sikander Fayaaz Bhadera, additional secretary general PTI (Pakistan Tehreek-e-Insaf) South Punjab, clearly bewildered, tweeted “Yeh Cher wala kya scene hai?''.

It all began like so many legendary love stories—especially the kind that the subcontinent is famous for—with the subject behind bars. Not Cher, it was Kavaan, a 29-year-old elephant who was originally from Sri Lanka and spent many years in captivity in Pakistan.

His mate Saheli died in 2012, and Kaavan, according to animal rights activists in Pakistan, is now clinically depressed. Addressing the proverbial elephant in the room, Micheal Kugelman, deputy director Asia Programme, at The Wilson Centre, a non-partisan policy forum for tackling global issues through independent research and open dialogue, provided context.

“No, Cher has not become a celebrity insafian. She is celebrating an Islamabad High Court decision that calls for an elephant named Kavaan to be freed from the Islamabad Zoo, where he has toiled in terrible conditions for years. She has been his long time advocate,'' he tweeted.

Kavaan has had many advocates over the years, none as tenacious as Cher. A petition for his release garnered 200,000 signatures on change.org. A gift by the Sri Lankan government, Kavaan has had animal rights activists in Pakistan lobbying for him for years. The pop star, with a reputation for being an animal activist, got involved in 2016. Her partner, also referred to in the tweets, in caps again, suggesting that Cher's enthusiasm is not dampened by Twitter, Mark Cowne visited Islamabad to try and find a way to free Kavaan. Cowne who has worked with elephants in Africa, with his wife, reportedly met with Islamabad zoo administration.

A visit to Kavaan made Cowne realised that the situation was not good. “However, after 26 years in chains, Kaavan is severely mentally damaged,'' he has been quoted saying in an article in Forbes.

Through Cher, Kavaan's plight became mainstream news. Finally, it took a court to set him free.

As for Kavaan, as per orders of the Islamabad High Court, a new home will be found for him within 30 days after they consult with Sri Lanka. It is a story, for once, with a happy ending.

Kavaan is not the only animal to have been offered as a gift. Animal diplomacy does help bring countries closer. Mongolia certainly subscribed to this belief. In 2015, Prime Minister Narendra Modi was presented a horse named Kanthaka on his trip to Mongolia. Unlike Kaavan, who travelled to Islamabad, Kanthaka is still very much in Mongolia, as a ministry of environment law prevented her from being brought back.

China, for years chosen to gift a panda to a country to goodwill. Panda diplomats were sent out in the world to win over hearts from the 1950s. No surprise that the first American President to be given a panda was Richard Nixon, who with his trusted lieutenant Henry Kissinger brought China from beyond the bamboo curtain to the world.

Panda diplomats are so prized being that two of them—Ed Shun and Da Mao, were flown back to China from Canada in March. The reason? Their supply of bamboo-which came straight from China—was bound to disrupt during the pandemic.

India too has tried to use the elephant as a gift of love. After a child wrote a letter to Chacha Nehru, the first Prime Minister of India ensured that an elephant travelled to the Netherlands. Murugan arrived in Amsterdam in 1954, lived a happy life and was truly mourned when he died. Elephants also made their way to zoos in Japan, the Soviet Union, Iran, Germany, Turkey and Canada during the first flush of independence.