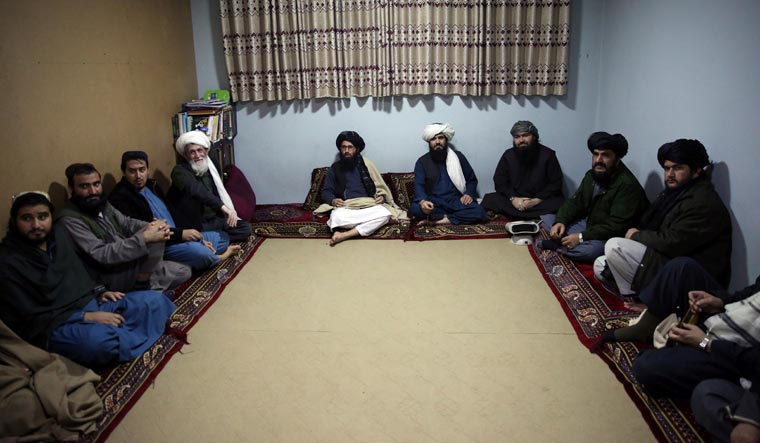 In this Dec. 14, 2019 file photo, jailed Taliban sit inside the Pul-e-Charkhi Jail after speaking with The Associated Press, in Kabul, Afghanistan | AP

The Taliban clarified on Monday that a statement on social media regarding India, and attributed to it, does not belong to the Islamic emirate whose policy is very clear not to interfere in the internal affairs of others. "The statement that has been circulated in certain media regarding India does not belong to Islamic emirate," tweeted Suhail Shaheen, the spokesperson the Taliban Political Office based in Doha, Qatar.

He said that the "policy of Islamic emirate regarding neighbour states is very obvious that we don't interfere in the domestic issue of other countries".

His remarks comes after tweets attributed to the Taliban spokespersons claimed that friendship between the group and India is impossible unless the Kashmir issue is resolved. The deputy of Qatar-based Taliban political office, Mulla Abas Stanekzai, recently alleged that during the last two decades, India has only cooperated and kept ties with those who are corrupt and have been put in power by foreigners not elected by the Afghan people. He mentioned that India should cooperate with Afghan peace process.

Rejecting the insinuations, the spokesperson of the Afghanistan ministry of foreign affairs, Gran Hewad, said that Afghanistan's relations with India are within international frameworks and based on mutual respect.

"India is one of the biggest donor countries and has helped Afghanistan in development and reconstruction areas, we appreciate their cooperation. We expect India and other neighboring countries to play a significant role in Afghan peace process," Hewad said.

Afghan political analyst Khalid Sadaat told Radio Azadi that if the Taliban continues to make such remarks, it will hurt Afghanistan's diplomatic ties in the future. Taliban should not give themselves this liberty to make country and state-level remarks, as it will have negative consequences for Afghanistan in the future. "And the other thing is that India and Pakistan are having historical enmity and Pakistan is playing a proxy role in Afghanistan and the Taliban are being accused of playing Pakistan's proxy role in Afghanistan and are backed by Pakistan, I believe these assertions of the Taliban are on Pakistan's demand," he said.