After US cut aid to Afghanistan, India reach out to Ghani to discuss 'evolving situation'

Modi and Ghani reaffirmed their commitment to “boost cooperation’’ 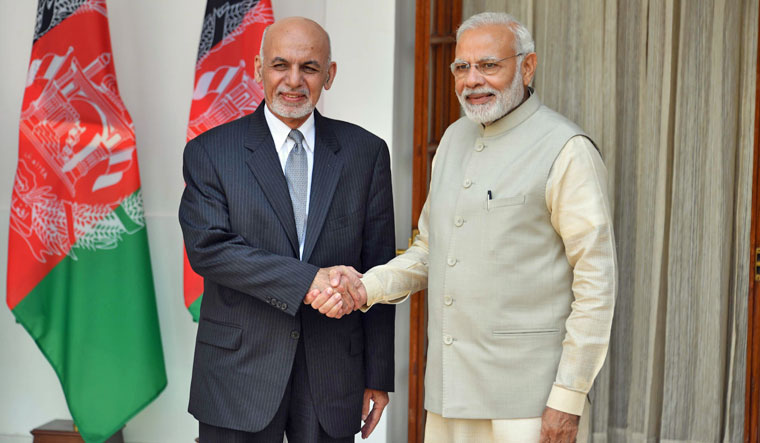 Prime Minister Narendra Modi and Afghan President Ashraf Ghani spoke on the phone on Tuesday to discuss the “evolving situation in the region’’, particularly the pandemic, and reaffirmed their commitment to “boost cooperation’’. This call came in hours after US Secretary Secretary of State Mike Pompeo expressed “disappointment’’ over Kabul’s inability to come to a compromise between President Ghani and his rival Abdullah Abdullah who has formed a parallel government. Pompeo, to demonstrate that he means business, has also cut aid to Afghanistan to the tune $1 dollars.

“Their failure has harmed US-Afghan relations,’’ a press statement issued by Pompeo read. “Because this leadership failure poses a direct threat to US national interests, effective immediately, the US government will initiate a review of the scope of our cooperation with Afghanistan. Among other steps, we are today announcing a responsible adjustment of our spending in Afghanistan and immediately reducing assistance by $1 billion this year. We are prepared to reduce by another $1 billion in 2021,’’ it stated.

This cut—for a government heavily dependent on aid—will be staggering. It will likely eat into the budget of Afghan security forces, which, the civilian experts believe, is to be pegged at $500 million a year. The Americans, to show good faith, have pledged $15 million to curb the spread of coronavirus in the country.

What is a double whammy for the Afghan government is that America is still going ahead with its promise to the Taliban. While Ghani and Abdullah Abdullah were most likely read the riot act by Pompeo—who travelled to Kabul despite the virus scare—the Taliban saw a different side of the Americans. “We are proceeding with the condition-based withdrawal of our forces in accordance with the US-Taliban agreement,’’ he stated.

The Taliban spokesperson Suhail Shaheen tweeted about a meeting “through video conference in the presence of Qatar and US states.’’ The meeting was about the release of the prisoners. “Other issues will be dealt with during the intra-Afghan negotiations,’’ he tweeted.

This will certainly help put the Taliban, already powerful, into the driver's seat. It is no secret that the Americans have been concerned about the lack of unity in the Afghan government. There has been an attempt to find a solution to the tussle between the two Afghan leaders.

President Donald Trump is keen to get out of Afghanistan. And fast. The US-Taliban agreement is a quick exit map.

The threat of cutting aid—a first for the US—is to put pressure on the Afghan government. The question is whether it will work. Already the relationship between the two presidents—not warm—has become worse. Ghani, on Tuesday, described his talks with Pompeo as positive even as he accused Abdullah of wanting to change the constitution. “I wanted to give Abdullah fundamental role in peace process and give his allies role in cabinet,’’ he has been quoted as saying. This throws the ball in Abdullah’s court. The last time a compromise between the two leaders was needed post the 2014 elections, the secretary of state John Kerry had helped reach a deal.

This time, nothing has worked. America has, however, let the door open. There is a suggestion in the statement that if a compromise is reached, the US is “prepared to support these efforts’’ and “revisit’’ the “reviews initiated’’. However, the statement makes it clear that the countdown for the American exit has begun.

For India, this doesn’t bode well. And there is no doubt that in Modi’s phone call to Ghani was also to promise him of India’s support.