EXCLUSIVE: Over 250 Indian students stranded in Iran due to coronavirus appeal for help 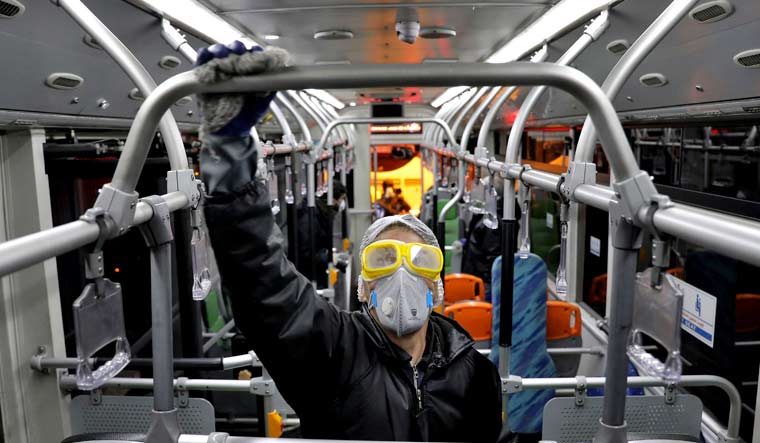 A worker disinfects a public bus against coronavirus in Tehran, Iran | AP

Over 250 students from Kashmir have been stranded in Iran because of coronavirus outbreak. With flights from Iran cancelled, and the number patients testing positive for the disease increasing each day, many of the students are desperate to get out of the country.

“I had booked a flight for today, but it was cancelled,'' said Mujtaba Shaw over the phone to THE WEEK. A third year student of medicine at Tehran University of Medical Sciences (TUMS), Shaw can barely conceal the anxiety in his voice. “I have booked a ticket for March 3 as well as March 5, but these are likely to be cancelled too,'' he said.

Stuck in Iran with no way to get out, these students have reached out to the Indian Embassy in Tehran, hoping to be evacuated. So far, the embassy has issued an emergency contact number and an email for the Indian nationals to keep in touch. The request has been forwarded to South Block. Meanwhile, the embassy has asked Indians in Iran to observe the advisories issued by the Iranian authorities and the World Health Organisation. In addition, Indian nations have been asked to wear masks, not fall prey to rumours and remain calm.

“We are very scared,'' said Huda, who has been studying medicine at Kish campus of the Tehran University of Medical Sciences, since 2018 . Living in Kish—an island away from Tehran—she is insulated from the virus at the moment. “I don't think we will be safe for very long,'' she said, adding, “There is a shortage of sanitizers and masks. So, even if we want to be safe, we can't.'' Her flight to India has been cancelled too. “The airlines have not refunded the money. We want to be evacuated,” she said.

With the sanctions on Iran, money transfers are difficult. International banking systems don't operate out of the country. Hence, all students carry money to use for the year. “Airlines are giving us vouchers. Since we are trying to book different permutation combinations to get out, we are now running out of money,'' said Shaw.

The situation is grim. Life in Tehran has come to a virtual standstill. Schools, colleges and universities have been shut down as a precautionary measure to stop the virus from spreading. The Tehran metro—used by three million people every day—is being santised daily. “Yesterday, two people collapsed in the metro, and they were infected by coronavirus. We are terrified,'' said Shaw.

Unable to get home and fielding panicked calls from parents, and under lockdown, getting through the day is difficult for them. “All we do is cry,'' said Qurat, another student at TUMS. She too had booked a ticket to fly out twice. But flights have been cancelled. While she is not barred from traveling around, with new cases being detected each day, there is a great deal of panic. Students are in a self imposed quarantine. “We don't try and go out at all,'' said Masooma, another student who has been at TUMS for the past two and a half years. In an attempt to get out, she had booked tickets for two days too, but the flights have been cancelled. “I was taking the Air Arabia flight via Sharjah,'' she said, adding, “But since UAE has banned all flights, we can't leave.''

Iranian official figures put the death toll at 26 and 245 confirmed cases, according to an AP news report. Iran health ministry has asked people to avoid unnecessary travel within the country. In the past few days, the Iranian deputy health minister Iraj Harirchi—who was leading the fight from the front— tested positive, as has the chairman of Iran parliament’s national security and foreign policy commission Mojtaba Zonnour—who represents Qom, the city where the virus first surfaced. In a video message, Zonnour has said he is under quarantine.

Iranian officials are optimistic in tackling the problem. The BBC had quoted a spokesperson of Iran's health ministry saying about Qom—which was the epicentre of the outbreak—that ten per cent of those hospitalised or suspected cases have been discharged." Harirchi—who also posted a video declaring that he had tested positive—has been quoted by the Guardian as saying, “We’ll defeat corona. Be assured. I’m saying this deep from my heart. This virus is democratic, and it doesn’t distinguish between poor and rich or statesman and an ordinary citizen.''

With travellers out of Iran testing positive for the virus, Turkey has sealed borders and suspended all flights. Pakistan too shut all flights from Iran. India has also issued a travel advisory on Wednesday asking Indians to refrain from non-essential travel to Republic of Korea, Iran and Italy. Desperate to get out, the students have reached out to the Indian Embassy in the hope of getting evacuated. “We spend our time consoling relatives, or ourselves, contacting the embassy or finding a way to get out,'' said Shaw.