No major change in 'trajectory' of coronavirus outbreak: WHO 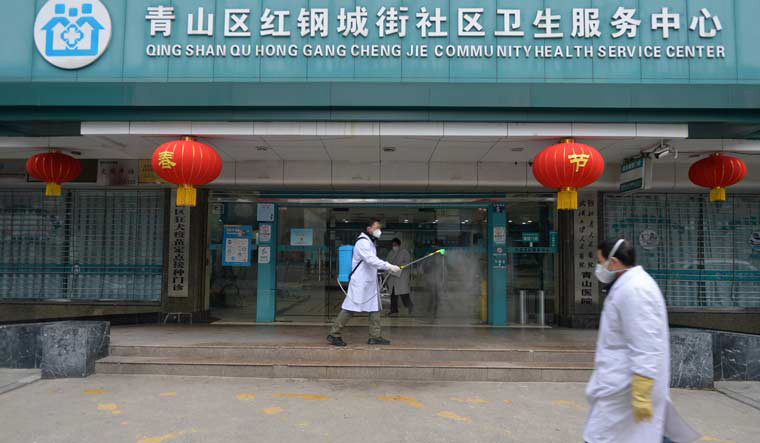 A doctor disinfects the entrance of a community health service center, which has an isolated section to receive patients with mild symptoms caused by the novel coronavirus and suspected patients of the virus, in Qingshan district of Wuhan | Reuters

The World Health Organization on Thursday said a sharp rise in reported COVID-19 cases in China, due to a change in counting methods, did not represent a big shift in the epidemic.

China's official death toll from the new coronavirus and the number of cases reported soared dramatically on Thursday after authorities altered the way they tally infections.

"This does not represent a significant change in the trajectory of the outbreak," Michael Ryan, head of WHO's health emergencies programme, said at a press conference.

"This increase that you've all seen in the last 24 hours is largely, in part, down to a change in how the cases are being reported." Ryan also said he expected members of a WHO-led international mission to China to arrive over the weekend.

In Hubei and its capital Wuhan, where tens of millions of people are trapped as part of an unprecedented quarantine effort, 242 new deaths were reported on Thursday. Another 14,840 people were confirmed to be infected in Hubei alone, with the new cases and deaths by far the biggest one-day increases since the crisis began.

Outside Hubei, there were 12 more deaths but the number of new cases fell for a ninth day in a row, with 312 extra patients.

Hubei authorities said the increases were because they had broadened their definition for infection to include people "clinically diagnosed" via lung imaging.

Up until now, they had solely confirmed cases with a more sophisticated laboratory test.