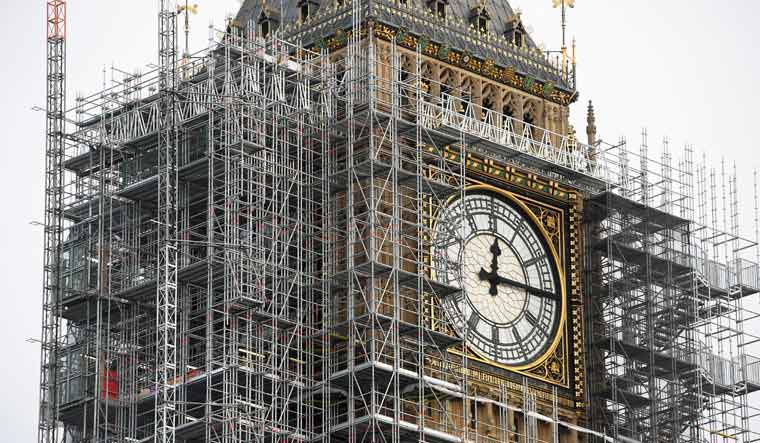 The Elizabeth Tower, housing the Big Ben bell, is seen clad in scalffolding, over the Houses of Parliament, in central London, Britain | Reuters

The cost of renovating the Elizabeth Tower, that houses the famous Big Ben is set to rise to nearly GBP 80 million or $104 million). Renovation of the clock began in 2017. The costs of repair have gone up after the discovery of bomb damage from World War II, pollution and damage from asbestos, the parliament said on Thursday.

The iconic tower is supposed to be restored to its former glory by 2021 and efforts to ensure the same is on.

The original refurbishment of the tower was supposed to cost GBP 29 million. The cost then more than doubled to GBP 61.1 million later that year. And now the final bill is estimated to come up to GBP 80 million.

A spokesperson for the House of Commons Commission, which is overseeing the project, called the spiralling costs “very frustrating”.

The task of restoring the tower, which has largely been silent since August 21, 2017, is proving to be more “ complex than we could have anticipated,” said Ian Ailles, director-general of the House of Commons.

The work includes repair to the clock's faces and mechanism, cracks in the tower's masonry and corrosion in the roof, as well as to restore the edging around the clock faces to its original 19th-century colour.

Here are some more interesting facts about the clock tower

Journalists during Queen Victoria's reign called it Stephen's tower. Its name was changed to Elizabeth Tower in June 2012. The clock's movement was designed by horologist Edmund Beckett Denison, and George Airy, the Astronomer Royal.

In 1916, during World War I, the clock fell silent for two years and its faces were not illuminated to avoid guiding the German Zeppelins. It, however, chimed through World War II.

When the tower fell silent in 2017, when the repairs began, Keeper of the Great Clock Steve Jaggs said, “Big Ben falling silent is a significant milestone in this crucial conservation project.” And that as its keeper he has had the great honour of ensuring this beautiful piece of Victorian engineering is in top condition on a daily basis.