Will Trump's visit to India include a stopover in Islamabad? Pak FM indicates he might

Trump sidestepped all questions on the topic 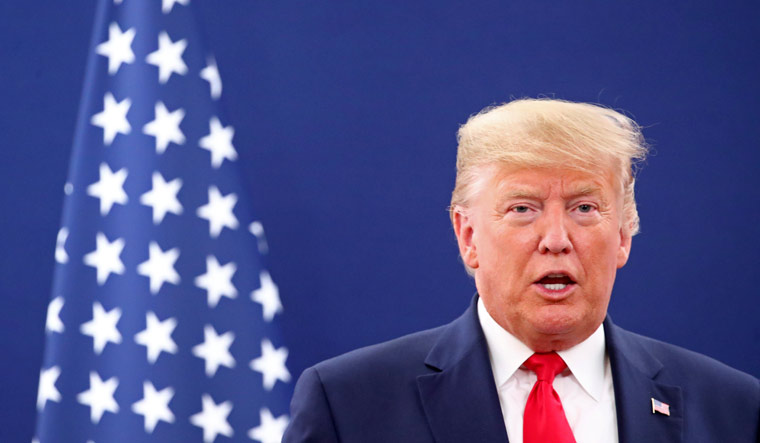 Donald Trump has assured the Pakistani leadership that he would visit the country "soon", Foreign Minister Shah Mehmood Qureshi said on Wednesday though the US President appeared to parry a question whether his planned trip to India would include a stopover in Islamabad.

Qureshi's statement came after President Trump and Prime Minister Imran Khan held a bilateral meeting on Tuesday on the sidelines of the World Economic Forum (WEF) in the Swiss ski resort. "US President Donald Trump has assured us that he will soon visit Pakistan," Geo News quoted Qureshi as saying in a statement.

But when a reporter posed a question to Trump prior to his meeting with Khan, the US president appeared to parry her query. "President, when you head out to India, will you also visit Pakistan?" the reporter asked. Trump said: "Well, we're visiting right now, so we won't really have to."

"We're getting along very well. I would say we've never been closer with Pakistan than we are right now. And that's a big statement, although I wouldn't say at all times we were close, as a country. But we are very close right now because of the relationship that we have. So it's very important," according to a transcript available on the White House website.

In New Delhi, government sources indicated last week that Indian and US officials were engaged in talks to finalise dates for a possible visit by President Trump to India. India had invited Trump to grace the Republic Day parade as the chief guest last year but the US president could not come due to scheduling issues. There has been indication that the US president may visit India in the next few months.

Meanwhile, the Pakistan foreign minister said the Khan-Trump meeting, the third between the two leaders in less than a year, was "very productive." "I was present at the meeting between Prime Minister Imran and US President Trump. It lasted for one hour and was very productive," Qureshi said, adding that the meeting was conducted in a cordial manner.

"Prime Minister Imran raised all important issues before the US President, including a request to support Pakistan at the Financial Action Task Force and improving the travel advisory the US issues for Pakistan," Qureshi said in his statement, according to Geo News. Pakistan has been urging the US to support its bid to exit from the grey list of the Paris-based FATF as a key meeting of the international terror financing watchdog was being held in Beijing which will scrutinise Islamabad's efforts to adopt stricter laws against terror financing and money laundering.

The FATF said Pakistan must demonstrate effective implementation of targeted financial sanctions against all UN designated terrorists like Lashkar-e-Taiba founder Hafiz Saeed, Jaish-e-Mohammad founder Masood Azhar, and those acting for or on their behalf.