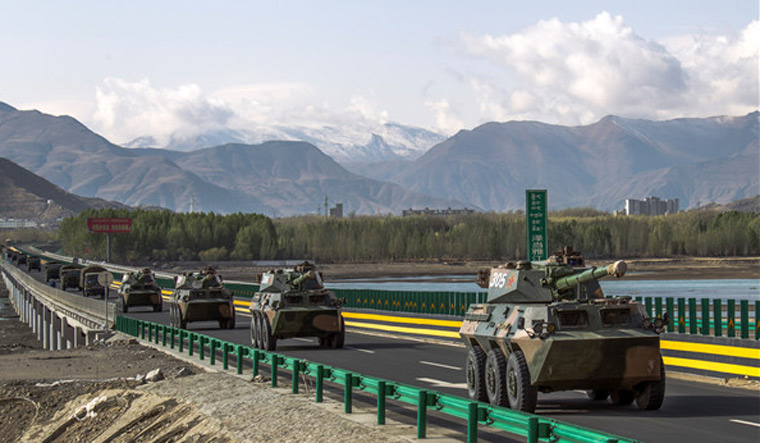 File photo: Vehicles of China's People's Liberation Army being deployed on an exercise in the Tibet Autonomous Region | China's Ministry of National Defense

The People's Liberation Army (PLA) Tibet Military Command started its New Year exercises in which it has deployed helicopters, armoured vehicles, heavy artillery and anti-aircraft missiles across the region from Lhasa, capital of Tibet, to the border defence front lines with elevations of more than 4,000 metres, state-run Global Times reported.

India-China Line of Actual Control (LAC) covered 3,488 kilometres, including the border along Arunachal Pradesh and Sikkim.

Both the tank and howitzer, which were revealed to the public on the National Day military parade on October 1 last year, are specifically designed with advantages for plateau regions and can play important roles in safeguarding border areas, the report said.

Their deployment in the Tibet Military Command will enhance PLA combat capability in the plateau regions, it quoted a military expert as saying.

Both were equipped with powerful engines, enabling them to manoeuvre efficiently in Tibet's terrains, a military expert was quoted as saying in the report.

Heavier hostile weapons cannot reach the oxygen-depleted border areas, and, if lighter, they do not have enough firepower, he said.

The Type 15 tank is the world's only modern lightweight tank in service and it is equipped with a 105-millimetre gun and advanced sensors that can "devastate enemy light armoured vehicles in regions," the report quoted the Chinese military magazine Weapon as reporting.

The six-wheeled, 155-millimetre vehicle-mounted howitzer is of high calibre, reacts fast and can be easily deployed, it said.