OPINION: Benazir Bhutto was no saint or benevolent angel

Benazir Bhutto's reign in Pakistan was ridden with corruption 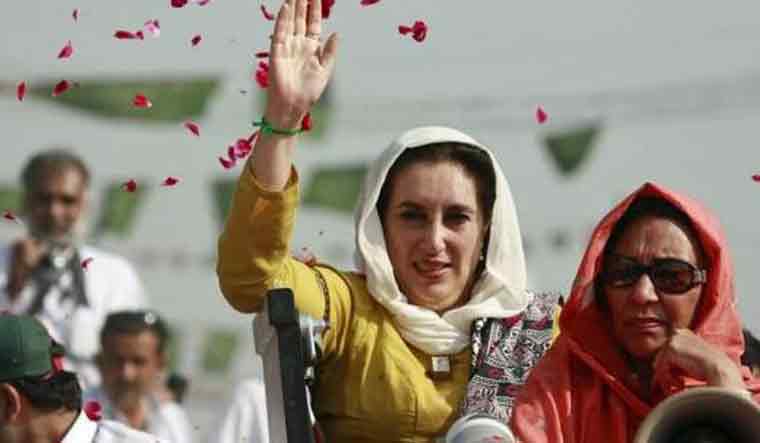 In the video on YouTube titled ‘Remembering Benazir Bhutto’, Raza Rumi, whom I otherwise respect for his liberal and secular views, and his colleague Ailia Zehra made wholly inane comments on the 12th death anniversary of late Benazir Bhutto, which I did not expect from a senior journalist of his kind.

Raza waxed eloquent on Benazir’s legacy, making it sound as if it is Lenin’s or Mustafa Kemal’s legacy. He spoke about Benazir’s struggle to restore democracy in Pakistani, her struggle against ‘intehapasandi’ (extremism), etc and her introduction of the Lady Health Workers Scheme, Benazir Income Support Programme and other pro-poor schemes. He contrasted Benazir with Imran Khan, alleging that while the latter got his opponents like Nawaz Sharif jailed, she forgave her enemies and believed in reconciliation with them, and working by consensus.

Raza also spoke of Benazir’s ‘social contract’ (thus elevating her to the status of Locke and Rousseau) and her policy of decentralisation. I am afraid, a closer study of Benazir shows that Raza’s fulsome praise holds no water.

There were many allegations of corruption against Benazir and her husband Asif Zardari, which Raza inexplicably (or conveniently) ignored. For instance, after a five-year investigation, a Swiss court in 2003 found both Benazir and her husband guilty of a huge amount of money laundering, and gave them suspended jail sentences of six months each, and ordered each to pay £8 million to the Pakistan government.

A diamond necklace worth £117,000 exposed Benazir’s money laundering trail. In her second term as PM, she had enriched herself and her husband with kickbacks from a government contract with two Swiss companies, SGS and Cotechna. The money was paid to two companies in the British Virgin Islands—Bomer Finances owned by Asif Zardari (Benazir sharing its assets with him), which received $ 8.2 million, and Nassam Overseas, whose ostensible owner is Nasir Husain, Benazir’s brother-in-law, which received $ 3.8 million.

Evidence of Benazir’s role in Bomer emerged from her visit to London where she bought a diamond necklace from Knightsbridge Jewellers for £117,000. This necklace was later found in a Swiss bank vault, and this is reminiscent of the Diamond Necklace Affair in France before the French Revolution of 1789.

Benazir had a 15-bedroom Rockwood Estate in Surrey in England valued at £3.5 million, and she is believed to have owned four other properties in London. Jeremy Carver, the lawyer of the Pakistan government, said there were at least half a dozen international cases of corruption pending against Benazir and Zardari in Switzerland, the US and Pakistan. Zardari became well known as Mr 10 per cent.

This might be only the tip of the iceberg of Benazir’s humonguous corruption. In her second term as PM, she appointed her husband as  Investment Minister, Chief of Intelligence Bureau and Director General of Federal Investigative Agency. This gave him a monopoly on the country’s gold imports, which netted him a cool $10 million.

John Burns, a journalist of the New York Times, investigated the business transactions of Benazir and her husband, exposing the mammoth scale of their corruption. By 1996, their takings from these deals were estimated at $1.5 billion. In 1996, Transparency International ranked Pakistan as the world’s second most corrupt country.

In the 1990s, during Benazir’s term as PM, GDP declined to 3-4 per cent, poverty rose by 33 per cent and the number of Pakistanis living in absolute poverty doubled.

And yet, Raza, in his wisdom, seeks to paint Benazir as some kind of benevolent angel, whose assassination was an irreparable and colossal loss to Pakistan.

As regards the Lady Health Workers Scheme, it was no doubt trumpeted with great fanfare, like Arvind Kejriwal’s mohalla clinics, but it is reported that the health workers are on strike for not receiving regular salaries, job security and attacks on them. And, as regards the much touted Benazir Income Support Programme, it is well known that it is riddled with corruption.

Raza describes Benazir as a democrat. But the truth was exposed by her own mother Nusrat, whom she removed as Hony Chairperson of PPP when Nusrat joined hands with her son Murtaza (later killed in mysterious circumstances). Nusrat said about her daughter, "She talks a lot about democracy, but she is a little dictator".

As for her alleged support of women’s issues, the fact is she never got the Hudood and Zina Ordinances repealed. And as for her ‘liberalism’, she did not get repealed the Second Constitutional Amendment declaring Ahmadis non-Muslims, which her father, who posed to be a great fighter for the people, but got enacted for his political gain, thus throwing Ahmadis to the wolves. Nor did she get repealed the blasphemy law (section 295 C PPC) used to persecute minorities, nor the law which Gen Zia enacted to persecute Ahmadis for ‘posing to be Muslims’.

I think Raza and Ailia need a second look at the late lamented 'daughter of the east'.