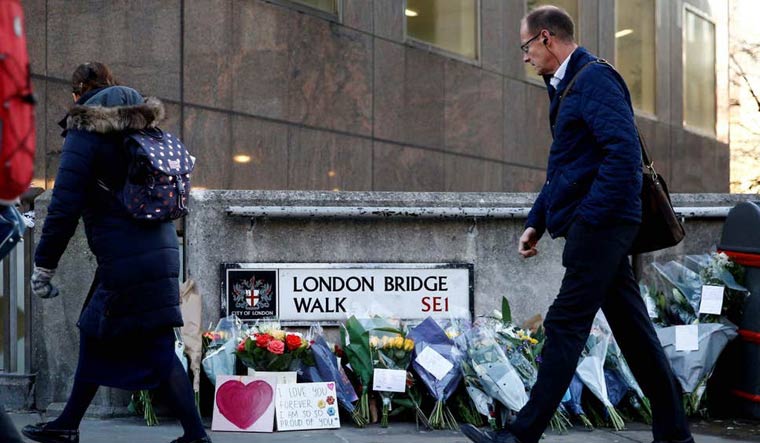 Usman Khan, the convicted terrorist of Pakistani origin who killed two people in the London Bridge attack before being shot dead by the Scotland Yard, has been buried at his ancestral village in Pakistan-occupied Kashmir (PoK).

However, the Foreign Office said it was not aware if Khan's body was in Pakistan.

The body of the 28-year-old London Bridge terrorist, who was a British citizen, was flown to Islamabad from London and then handed over to his family on Friday.

"Usman's family didn't want to bury him in the UK," one of his relatives said, adding that his funeral prayers were earlier offered in a mosque in UK's Birmingham city.

According to Dawn newspaper, Khan's body was brought by his family from the Islamabad airport to Kijlani village in PoK's Kotli district where the funeral took place on Friday afternoon, following which he was buried in a local graveyard.

"Khan's body was shifted to Islamabad from London aboard a PIA flight PK-792. Later, it was handed over to his family," the report quoted Pakistan International Airlines' General Manager (Public Relations) Abdul Hafeez as saying.

His family members refused to speak to the media, saying they had already given their statement through the London police on Tuesday.

Earlier on two occasions on Monday and Friday, angry mob besieged the office of the Dawn in Islamabad, chanting slogans against the organisation and setting copies of the newspaper on fire, for publishing a news report in which the London Bridge attacker was identified as a "man of Pakistani origin".

Khan went on a rampage on November 29 in the London Bridge and killed one man and a woman and injured three others before being shot by armed police officers. The Islamic State terror group has claimed the responsibility for the attack.

Khan was a convicted terrorist who was jailed seven years ago over a plot to bomb the London Stock Exchange and build a terrorist training camp on land owned by his family in Pakistan-occupied Kashmir.

He had also discussed staging a Mumbai-style attack on the UK Parliament and described by the judge who sentenced him for terrorism offences in 2012 as an ongoing risk to the public with a "serious, long term venture in terrorism".

The profile of Khan dating back to his conviction in 2012 reveals his links with terror groups. He had been secretly recorded talking about plans to recruit UK radicals to train at a camp in Pakistan-occupied Kashmir (PoK), the region his family comes from.

He and two other co-conspirators had conducted a surveillance trip around central London as they talked about launching a Mumbai-style attack on UK Parliament. The then-20-year-old pleaded guilty to engaging in conduct for the preparation of terrorism, which included travelling to and attending operational meetings, fundraising for terrorist training, preparing to travel abroad and assisting others in travelling abroad.

Khan had originally received an indeterminate sentence to be kept behind bars for public protection but this was quashed by the UK Court of Appeal in April 2013, after which he was given a determinate 16-year jail term and ordered to serve at least eight years in prison before being considered for parole.

He had been released on licence, or parole, in December last year and was reportedly being monitored via an electronic tag.