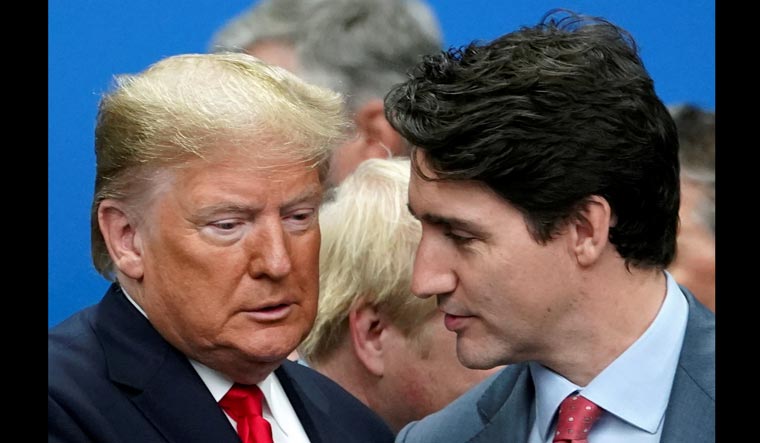 A viral video of world leaders huddled together and apparently joking about US President Donald Trump has not gone down well with the American leader, who called Canadian Prime Minister Justin Trudeau ‘two-faced’ and cancelled a scheduled press conference, which would result in him leaving the summit early as a result.

This happens at every NATO summit with Trump. Every G7. Every G20. The US President is mocked by US allies behind his back. pic.twitter.com/FWncEM7jVs

In the clip, Johnson can be seen asking Macron, “Is that why you were late?”, prompting Trudeau to reply, with a beer in his hand, “He was late because he takes a 40 minute press conference off the top every time,” referring to Trump's one-hour long press conference during what was supposed to be just a five-minute photocall with NATO General Secretary Jens Stoltenberg.

The leaders, huddled together, appear to be trading views on Trump, with Macron gesticulating energetically as he replied inaudibly. The clip then cuts to a shot of Trudeau saying, “You just watched his team’s jaws drop to the floor” in an apparent reference to Trump’s habit of keeping his own advisors out of the loop on his own actions.

They appeared unaware that they were being recorded.

When asked about the viral clip on Wednesday, Trump replied saying “Well, he’s two-faced.” He added that “He’s a nice guy… I find him to be a very nice guy.”

Trump said the reason could be that Trudeau was not happy about his press conference with Trump on Tuesday, where the US President pressed his Canadian counterpart on whether Canada was spending up to two per cent of its GDP on defence, as per a pledge made by NATO leaders in 2014.

....When today’s meetings are over, I will be heading back to Washington. We won’t be doing a press conference at the close of NATO because we did so many over the past two days. Safe travels to all!

Tension, rather than solidarity, loomed over the 2019 London summit of the North Atlantic Treaty Organisation (NATO), as a result of US President Donald Trump’s many differences with NATO leaders.

On Tuesday, Trump also had a one-on-one meeting with Macron , one that was overshadowed by the two leader’s previous jibes at each other—Macron had decried the “brain death of NATO” in an interview with the Economist, a comment that Trump later called “nasty”, that German Chancellor Angela Merkel called “drastic” and that the Russia foreign ministry spokesperson called “golden words… an exact definition of the current state of NATO.”

Trump confronted Macron about his statement on Tuesday, calling his statements “insulting”. The French president refused to back down from his comments, saying he stood by what he said though he knew they had shaken many people. “We don’t have the same definition of terrorism around the table,” Macron said, pointing out how Turkey is now fighting against those who “fought with us, shoulder to shoulder, against ISIS”—referring to Turkey’s military campaigns against the Peshmerga.

Trump later asked Macron, sarcastically, “Would you like some nice ISIS fighters? I could give them to you. You could take every one you wanted,” in response to a question on whether Macron had committed to allowing captured ISIS fighters to return to France.

Later on Tuesday, Johnson called the US "an invaluable ally" and urged the other NATO nations to resolve to their commitment to spend two per cent of their national GDPs on defence. "We have been successful in that campaign and what has happened since the Cardiff summit in 2014. Actually, there has been a substantial increase in spending by our European friends, up 130 billion dollars (£99 billion). It will rise to 400 billion dollars (£305 billion) by 2024," Johnson said.

World leaders had also famously laughed at Trump during his 2018 address to the UN General Assembly, when he claimed that his administration had achieved more than any before it.