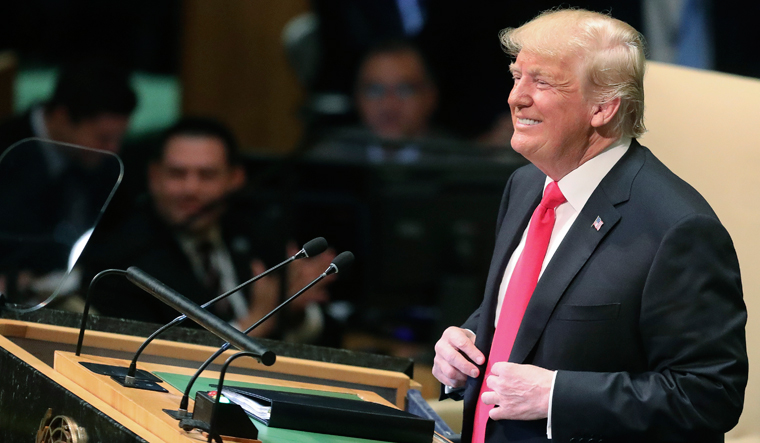 President Donald Trump react1s to laughter from diplomats during his address to the United Nations General Assembly, Tuesday | AP

US President Donald Trump's solemn moment in the great hall of the United Nation's General Assembly on Tuesday had an embarassing start as his speech, within a minute into it, resulted in laughter from the other world leaders present.

"In less than two years, my administration has achieved more than almost any administration in the history of our country," Trump boasted, like he does at his campaigns as the mid-term elections get nearer.

As Trump noticed the rising sound of chuckles, he insisted "So true." He then looked around the hall and said with a smile, "I didn't expect that reaction, but that's okay," eliciting louder laughter.

Trump went on to address the assembly for another 34 minutes where he projected low US unemployment rates and talked about why global rules do not apply to the US. He went on to urge international pressure against Iran, after he withdrew from an agreement on curbing Tehran's nuclear programme, and lashed out at the OPEC cartel over oil prices and China over the imbalance in trade.

Though it seemed like a spontaneous moment to those watching, and it really was so, Trump has claimed that his boasts in the speech were meant to get some laughter. But those who have watched the president also know that he does not laugh at himself and never appreciates a joke at his expense.

Twitter users were quick to bring back an old tweet Trump had made in 2014 in reference to former president Barack Obama.

We need a President who isn't a laughing stock to the entire World. We need a truly great leader, a genius at strategy and winning. Respect!

Throughout President Obama’s Presidency, Trump implied that Obama was the laughing stock of the world.

I rest my case.

That he was laughed at one of world's biggest platforms was used by Trump critics to mock him further.

It speaks volumes when Trump claims to have done more in two years than most administrations in U.S. history and members of the U.N. general assembly laugh at him. This isn't the first time world leaders have laughed at Trump, and far from the first time he's lied. #resist #trump

Another Trump voter reality check: when will moments like this break-through that the rest of the world thinks Trump is a clown? Getting laughed at at the UN is as obvious as it gets. But I’m sure it was all a globalist-Soros conspiracy https://t.co/caPLyPQHwn

“He’s like a bone stuck in our throats! You can’t swallow him, you can’t spit him out”—DC cab driver, unsolicited, on Trump

He also could not stop guffawing at Trump getting laughed at at the UN today. “They came to HIS home & laughed in his face!”

We're splitting our guts! As is the world. The devil, they say, hates nothing more than being laughed at.

“America is respected again.”
- Donald Trump in Elkhart, IN

“We are respected again, I can tell you that.”
- Donald Trump to US Naval Academy

“Our country is respected again.”
- Donald Trump in Springfield, MO