A protester brought a lion to the streets in Iraq

The lion was seen draped in the Iraqi flag, and lunging at bystanders 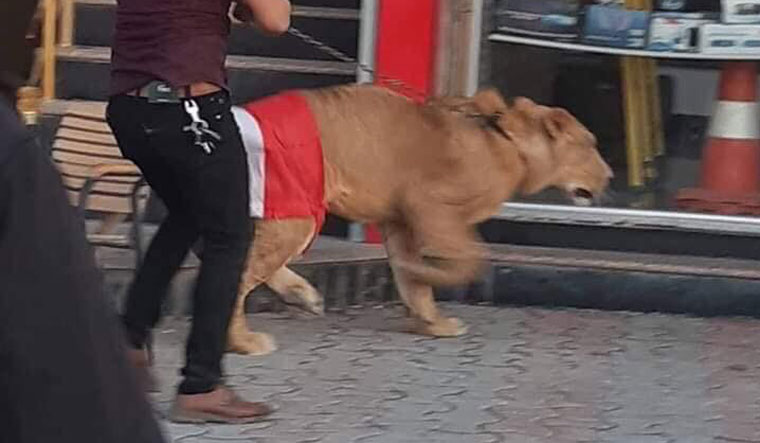 A lion draped in the Iraqi flag is the latest attempt by protestors in Iraq to make their stand and their voices clear.

Footage that has been circulating on social media shows a handler with his lion, with many saying that it was brought in response to the dogs deployed by the police.

In the viral footage, the lion can be seen with its handler. It appears to be aggrieved and briefly lunges out at a passer-by before being restrained.

Lions are no longer native to Iraq, with the last-known lion in the country having been killed in 1918 in the lower Tigris region, according to Sudipta Mitra in Gir Forest and the Saga of the Asiatic Lion.

Intense protests have been underway in Iraq since October, as millions have come out onto the streets protesting against corruption, unemployment and the dis-functioning state. Hundreds have been killed as the government responded with deadly force, firing live rounds and tear gas shells directly at protesters, and cutting internet access across the nation.

The protesters have been demanding electoral reforms, including constitutional amendments and infrastructure legislation. In response, the Iraqi parliament received a draft of a new electoral law this week, though it has not yet been debated.

On Friday, Iraq’s top cleric joined in with condemnation of the government, saying that the country would never be the same again after these protests.

“If those in power think that they can evade the benefits of real reform by stalling and procrastination, they are delusional,” AFP reported Grand Ayatollah Ali Sistani as saying. Sistani said that the protester’s demands were ‘legitimate’ and that protests were the ‘only honourable way’ to seek change.