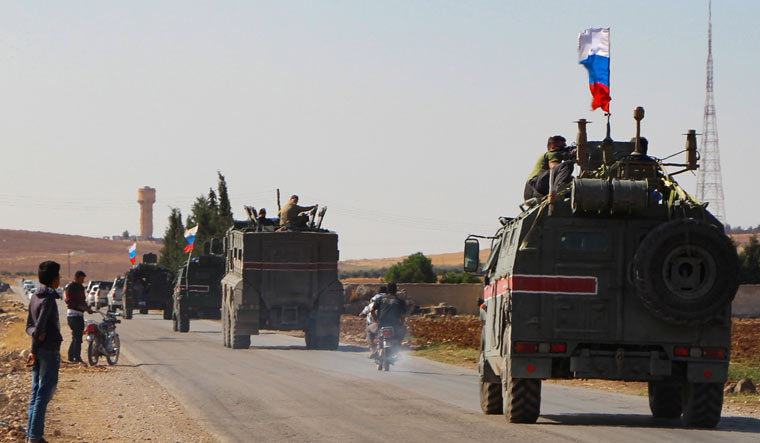 A convoy of Russian military vehicles drives toward the northeastern Syrian city of Kobane on October 23, 2019 | AFP

President Donald Trump announced on Wednesday that the United States would be lifting sanctions on Turkey, hailing the success of a ceasefire along its border with Syria.

"Earlier this morning, the government of Turkey informed my administration that they would be stopping combat and their offensive in Syria and making the ceasefire permanent," he said in a televised address from the White House.

"I have, therefore, instructed the Secretary of the Treasury to lift all sanctions imposed October 14th in response to Turkey's original offensive moves against the Kurds in Syria's northeast border region," he added.

Trump's announcement came as Russia deployed troops along the border as part of a deal between Russia and Turkey, which gives Kurdish fighters 150 hours from noon on Wednesday to pull back 30km (18 miles) along the border.

According to the deal negotiated between Turkish President Recep Tayyip Erdogan and Russian President Vladimir Putin, Russia and Syria would oversee the pullback of Kurdish forces. Turkey retains the territories it took from the Kurds, and also gets to move forward on its plan to enforce a 'safe zone' along the border.

Russian airpower proved instrumental in helping Syrian President Bashar Hafez al-Assad retain power in the midst of a multiple-front civil war. Putin spoke to Assad following his talks with Erdogan, assuring the Syrian leader that restoring Syria's territorial integrity was the main task for all parties.

According to the Kremlin, Assad reportedly thanked Putin and expressed his "full support for the results of the work, as well as the readiness of the Syrian border guards, together with the Russian military police, to reach the Syrian-Turkish border."

Under the deal, Russian military police along with Turkish military forces will patrol the border. According to Russian news agency Interface, Russian patrols have already begun in the town of Manbij, which two weeks ago, was home to a key US base in the region.

Kremlin spokesman Dmitry Peskov warned the Kurds to withdraw from the Turkey-Syria border or be "steamrolled" by Turkish forces, saying that the United States had "betrayed and abandoned" them.

"The United States had been the Kurd's closest ally in recent years. [But] in the end, it abandoned the Kurds and, in essence, betrayed them...now they [the US] prefer to leave the Kurds at the border [with Turkey] and almost force them to fight the Kurds," Peskob was quoted as saying by Al Jazeera.