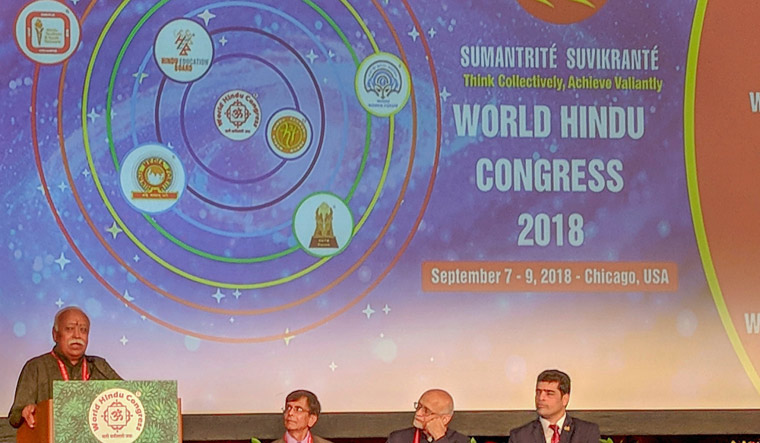 The Vishwa Hindu Parishad has filed a lawsuit against five individuals who allegedly disrupted the second World Hindu Congress (WHC) in Chicago in 2018.

The lawsuit, which was filed at the Circuit Court for the 18th Judicial District in Illinois against five named and 10 unidentified defendants, accuses them of conspiring to trespass into the convention, and counterfeiting press passes and other documents in order to gain unauthorised access.

A group of protesters had briefly disrupted the proceedings of the WHC by allegedly raising slogans, demanding religious leaders at the meet to oppose the Indian government's alleged "actions against religious minorities".

"The complaint was filed on September 11, 2019, approximately one year after the 2018 WHC disruption, both to commemorate the 126th anniversary of Swami Vivekananda's historic speech in Chicago and the horrid attacks on this country on September 11, 2001,” VHP-America said in a statement on Tuesday.

In its lawsuit, VHP-America alleges that the defendants and their accomplices erupted in an outburst during one of the WHC's plenary presentations and taunted and intimidated presenters and attendees.

The complaint seeks damages from the defendants for the substantial losses incurred by the organisers as a result of the defendants' improper actions.

Court records reveal that two of the named defendants were arrested for and eventually pleaded guilty to charges arising out of the events at the WHC, a media release said.