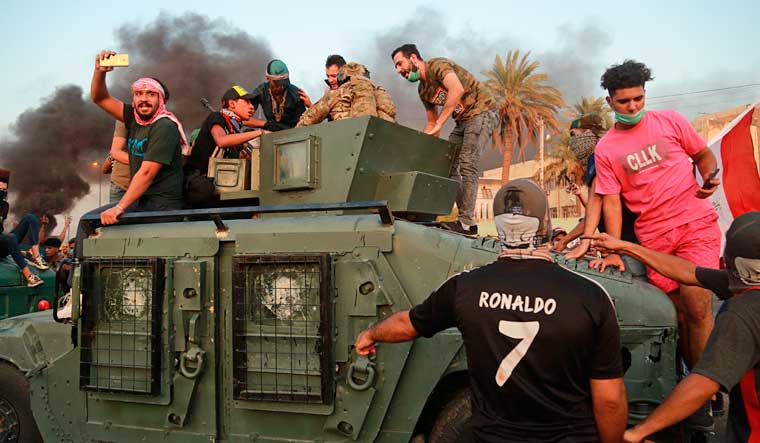 Anti-government protesters confront a soldier from the Federal Police Rapid Response Forces before they burn the armored vehicle, during a demonstration in Baghdad, Iraq | AP

In a call with Iraqi Prime Minister Adil Abdul Mahdi, Mike Pompeo, US SEcretary of  "condemned the recent violence in Iraq and noted that those who violated human rights should be held accountable," the department said in a statement. He called on the government to "exercise maximum restraint."

"The secretary lamented the tragic loss of life over the past few days and urged the Iraqi government to exercise maximum restraint.

Pompeo reiterated that peaceful public demonstrations are a fundamental element of all democracies, and emphasized that there is no place for violence in demonstrations, either by security forces or protestors."

Demonstrations in Iraq began with demands for an end to rampant corruption and chronic unemployment but escalated with calls for a complete overhaul of the political system.

The latest confrontations have killed more than 100 people in less than seven days and wounded 6,000.

Iraqi security forces have been shooting at young Iraqis demanding jobs, electricity and clean water and an end to corruption. “This cycle of protests could be contained, but the political system will continue to lose legitimacy," Ayham Kamel, Middle East and North Africa head at Eurasia Group said.

Some of the protesters are teenagers or fresh university graduates, who have been unable to find jobs in the country ridden with corruption, that also is one of the world's biggest oil reserves. They are no different from those who rioted in the southern city of Basra over chronic power cuts and water pollution last summer. They do not have a clear list of demands or a program, nor do they have a spokesman to speak on their behalf. The movement that has quickly spread from Baghdad to the Shiite heartland in the south, has no quick solutions.

Iraq's PM Mahdi has struggled to remain neutral amid tensions as protesters are being met with water cannons, tear gas and bullets. Iraq is currently caught in the middle of escalating tensions between the United States and the regional Shiite power Iran both allies of the Baghdad governmen, making the protests an ill-timed one.

Round-the-clock curfew has been imposed and the internet has been shut down for days in an attempt to control the protests. Interior Ministry spokesman Maj Gen Saad Maan said eight members of the security forces were among those killed and 51 public buildings and eight political party headquarters had been torched by protesters. The massive crackdown appears to have succeeded in whittling down the number of protesters for now. However, sporadic clashes between demonstrators and security forces continue on a smaller scale. Monday night Sadr city witnessed an hours-long gunbattle.