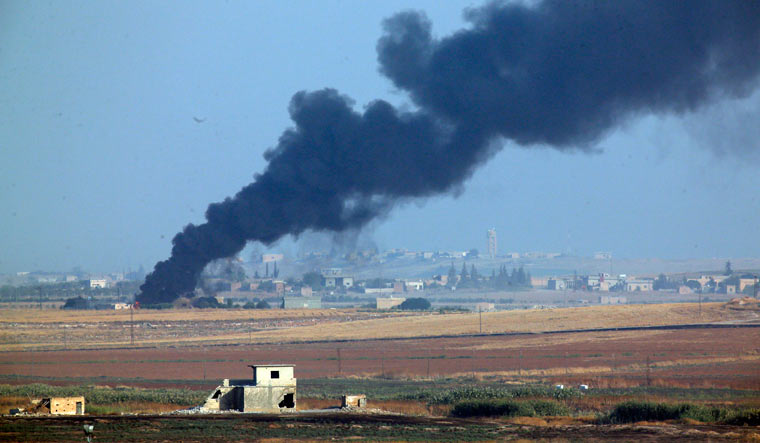 In this photo taken from the Turkish side of the border between Turkey and Syria, in Akcakale, Sanliurfa province, southeastern Turkey, smoke billows from a fire inside Syria during bombardment by Turkish forces Wednesday, Oct. 9, 2019 | AP

The first strikes in the Turkish offensive against Kurdish militia forces formerly backed by the United States took place on Wednesday, as Turkey launched air strikes and ground offensives near the border town of Ras al-Ain.

Turkish President Recep Tayyip Erdogan announced that a military offensive had been launched into northeastern Syria on Wednesday, tweeting that their aim was to “destroy the terror corridor which is trying to be established on our southern border and to bring peace and peace to the region.”

In a statement, the Syrian Democratic Forces (SDF) said that the attack killed two civilians and injured two others near Ras al-Ain. "We call on all the countries of the international coalition...to bear their responsibility and prevent a possible, imminent humanitarian crisis,” the SDF said.

Turkey is believed to have attacked positions of the SDFs, a largely Kurdish-led coalition of forces on the border between Syria and Turkey. Turkey’s stated aim was to push them at least 32 km away from the border to create a ‘safe zone’, asi t views the Kurdish fighters as terrorists. The total territory would include all of that which is currently controlled by the SDF.

In response to the attacks, NATO Secretary-General Jens Stoltenberg said that it was important not to destabilise the region any further, telling reporters that Turkey had “legitimate security concerns” and that it had informed NATO about the attack on Kurdish fighters in Syria. "I count on Turkey to act with restraint and ensure that any action it may take in northern Syria is proportionate and measured," Stoltenberg said after meeting Italian Prime Minister Giuseppe

Conte, adding that "It is important to avoid actions that may further destabilise the region, escalate tensions and cause more human suffering."

The European Union (EU) took a sterner stance, with European Commission President Jean-Claude Juncker demanding that Turkey halt its operations against the Kurdish militants, adding that the EU would not pay for any so-called ‘safe zone’.

The United Nations Security Council (UNSC) is expected to meet behind closed doors on Thursday in response to the attacks, Reuters reported diplomats as saying. The discussion of the situation in Syria by the 15-member Security Council was requested by five European members, Britain, France, Germany, Belgium and Poland,

The Middle East Eye reported Kurdish officials saying that the attacks had thrown a camp holding thousands of ISIS prisoners into chaos. 60,000 suspected members of ISIS are held at the al-Hol camp.

US officials say that the attacks have forced the SDF to halt their anti-ISIS operations.

The Turkish offensive came after US President Donald Trump, on Sunday, greenlit the operation and announced the withdrawal of US forces from the region, tweeting that it was “time for us to get out of these ridiculous Endless Wars, many of them tribal, and bring our soldiers home.”

The US was the largest-backer of the Kurdish forces, who had served as frontline fighters in the war against ISIS.