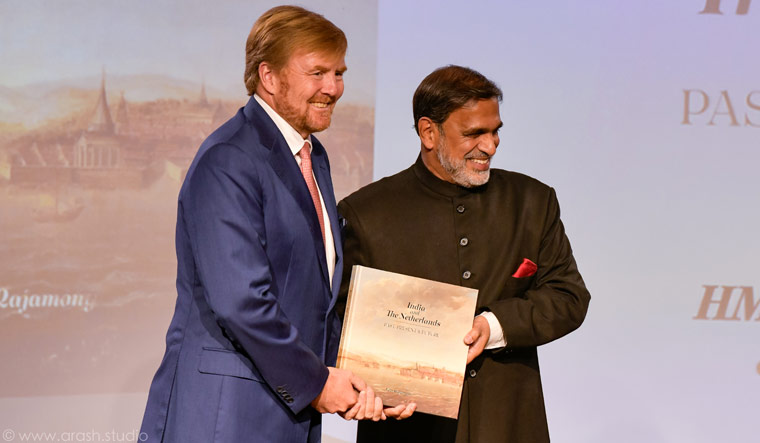 King Willem-Alexander of the Netherlands receiving the first copy of 'India and the Netherlands, Past, Present and Future' from Indian Ambassador Venu Rajamony

The Indian Ambassador to the Netherlands, Venu Rajamony, released his book titled India and the Netherlands, Past, Present and Future at a seminar held at the Rijksmuseum in Amsterdam on Monday, September 30.

The King of the Netherlands, Willem-Alexander, received the first copy in the presence of the Queen Máxima of the Netherlands. Guests included the Dutch Minister for Education, the Deputy Mayor of Amsterdam and the ambassadors of 26 countries. The event was a curtain-raiser for the King and Queen’s upcoming official trip to India in October.

The book has been described as “an encyclopaedia of the cross-cultural legacy between India and the Netherlands” that “highlights the significant place India occupied in the Dutch world view and the relationship between the two nations secured by strong economic ties and vibrant exchanges in the fields of culture, sports, and yoga.”

According to the press release by the Embassy of India in the Hague, “The book presents vivid snapshots of relations between the two nations over the centuries. It brings to life the compelling personalities whose contributions shaped the Indo-Dutch discourse and also skilfully strings together nuggets of little-known information. It reminds that India and the Netherlands, above all, share a cultural and intellectual resilience, which has outlasted the challenges of change. It also emphasises the bilateral strength of present-day ties, and the infinite mutual potential that the future holds for India and the Netherlands.”

"India and the Netherlands-Past, Present & Future" book authored by Ambassador @venurajamony will be released in the presence of the King & Queen of the Netherlands at Rijksmuseum Amsterdam on September 30 pic.twitter.com/VYKQWHR1pS

At the seminar, jointly organized by the Embassy of India and the Royal Asian Art Society in the Netherlands, talks were held on the historical, cultural and business-related ties between India and the Netherlands. The talks were by Mr. Hans de Boer, Chairman, VNO-NCW (Dutch Employers Federation); Mr. Marens Engelhard, Director of the National Archives of the Netherlands; Mr. Taco Dibbits, Director, Rijksmuseum, Mr. Menno Fitski, Head of the Asian Art Department and Ms Martine Gosselink, Head of Department of History, both of the Rijksmuseum; and Mr. Pieter Ariens Kappers, Chairman Royal Asian Art Society of the Netherlands.

After the event, the King and Queen viewed a 12th-century statue of Nataraja in the Rijksmuseum and interacted with representatives in the fields of business, science, culture, sports, food and health 'who embody the Indo-Dutch connection'.

The Dutch King and Queen are expected to make the royal family’s third official visit to India on October 14, during which time they are expected to visit the ‘Indo-Dutch interactions in the time of Rembrandt’ exhibition at the Chhatrapati Shivaji Museum in Mumbai, as well as the former Dutch colony of Kochi.

At the event, King Willem-Alexander told ANI, “India is a very important country for the Netherlands. I am very glad that in the long tradition, my wife and I are visiting India in October. India is amazing, its hustle-bustle, they have vibrant technology innovations and it is an amazing place to do business.”

He added that India and the Netherlands could cooperate on agriculture, water management and climate change. He also said that while they regretted the Brexit process, the post-Brexit period would see the Netherlands become an important entry point in Europe and for Indian companies.