Gandhi's London connect to be celebrated to mark 150th anniversary 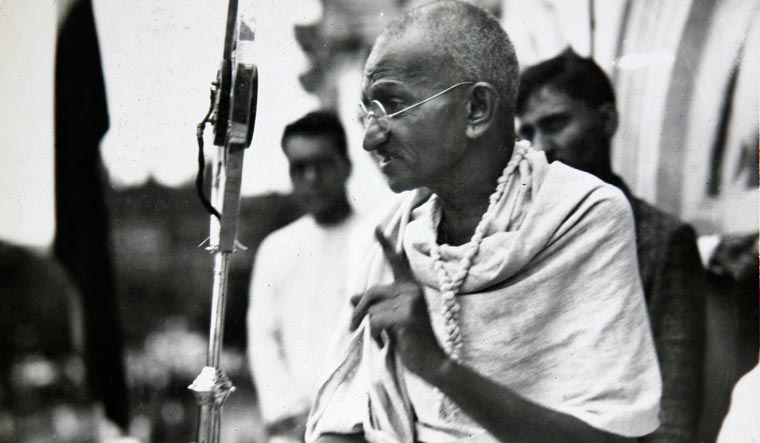 In this file photo dated 1931, Mahatma Gandhi talks to a crowd in India | PTI

Mohandas Karamchand Gandhi first docked in England as a student just days before his 19th birthday in 1888 in pursuit of a law degree and is known to have fully immersed himself in London life.

The connect of that teenager who went on to become the leader of the Indian national movement can be found in many areas of the British capital, something the Indian High Commission in London will be using as a starting point for its celebrations to mark his 150th birth anniversary year.

"Mohandas Gandhi loved London. He arrived just prior to his 19th birthday, a nervous unsure young man from Porbandar, desperate to emulate what he thought the British style of living was," explains Lord Meghnad Desai, a leading British Indian academic who recently set up a series of Mahatma Gandhi scholarships in his capacity as the Chair of the Gandhi Statue Memorial Trust.

"When he left three years later, he had grown into a confident young man, an English barrister as he styled himself," he said.

Records show that Gandhi met more local, British people than other Indians visiting as students at the time.

His search for a vegetarian restaurant brought him into contact with an exotic crowd of anarchists, socialists, health faddists and Christians and led him to even draft an unpublished 'Guide to London', capturing the city's haunts by foot.

In recognition of his brief stay at the grand hotel The Victoria near Trafalgar Square, the Indian High Commission planned a special talk on "Values and Teachings of the Mahatma" by the Gandhian Forum for Ethical Corporate Governance.

The address by Shobhana Radhakrishna of the Forum's Chief Functionary at 8 Northumberland Avenue marked the site of the original hotel which no longer exists, as part a series of Gandhian events for the anniversary year.

Besides the annual ceremonies that take place at the Gandhi statues at Tavistock Square and Parliament Square in London on October 2, this year there are also plans to mark the milestone with a Vegetarian Food Festival in recognition of Gandhi's own quest for vegetarian food in London.

While Gandhi Jayanti celebrations will also cover the universities of Oxford and Cambridge in coming weeks, London will remain at the heart of the events, given Gandhi's own love for the city.

A Heritage Blue Plaque marks the Victorian home he inhabited at Baron's Court Road in West Kensington during his student days with the words "Mahatma Gandhi lived here as a law student".

There is a commemorative plaque also to be found at Bromley-by-Bow in east London, where he stayed during his last visit to London for the Round Table Conference in 1931.

Gandhi's days in London studying law at University College and then being called to the Bar in 1891 have been classed as his formative years before he went on to practise law in South Africa, where he honed the concept of satyagraha.

However, the fact that he walked eight miles a day as a frugal student on the streets of London is believed to have contributed greatly to his marches associated with the Indian freedom struggle in later years.

As Lord Desai, the man behind the iconic statue of Gandhi that now stands at Parliament Square, explains: "The shy young man from Porbandar had come a long distance in a short period. As he himself said if he was not living in India, his choice would be to live in London."