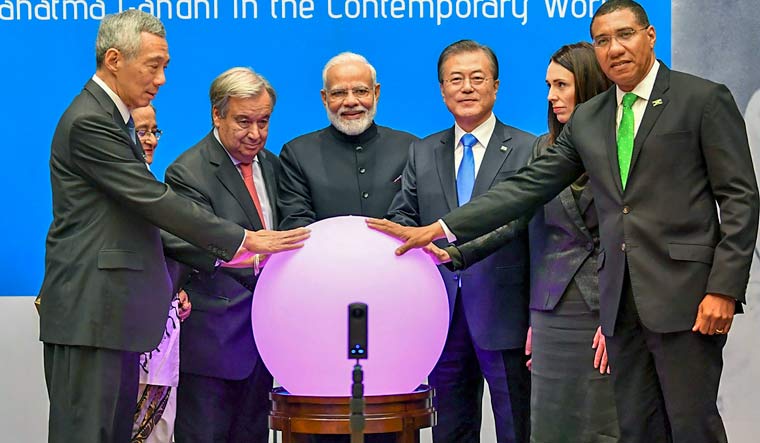 Prime Minister Narendra Modi has held key bilateral discussions with several world leaders, including with his counterparts from Armenia and New Zealand, on issues ranging from cooperation in terrorism, defence, support for India's candidature for a permanent UN Security Council seat and cyber security.

Modi met Prime Minister of Armenia Nikol Pashinyan on the sidelines of the High Level Segment of the 74th United Nations General Assembly here on Wednesday.

The Prime Minister thanked Pashinyan for Armenia's consistent support for India's candidature for the permanent membership of an expanded UN Security Council.

Both sides reviewed the bilateral relations between the two countries and recalled the historical linkages going back to centuries between India and Armenia, according to an official release.

Stressing the need to considerably enhance the volume of bilateral trade and investment, Modi expressed interest of Indian companies to explore opportunities in IT, agro-processing, pharmaceuticals, tourism and other sectors of Armenia.

The prime minister also sought Armenia's support for concluding an expeditious trading arrangement between India and the Eurasian Economic Union (EaEU) of which Armenia is a member. India and the EaEu are set to start negotiations in this regard soon.

Modi offered to strengthen India's development partnership with Armenia as per interest and needs of Armenia.

A large number of Armenian candidates benefit from training programmes conducted by India under the Indian Technical and Economic Cooperation (ITEC) programme.

On his part, Pashinyan briefed Modi on the new initiatives of openness of his government and in that context invited Indian investments in Armenia.

Referring to popularity of Indian culture, films, music and Yoga, Pashinyan called for a greater cultural and humanitarian cooperation between the two countries. About 3000 Indian students study in Armenia.

Pashinyan invited Modi to visit Armenia and the Indian leader accepted the invitation.

They also discussed global and regional issues of mutual interest, including the issue of international terrorism and appreciated the convergence of views between the two countries on this issue.

"Had an excellent meeting with PM Jacinda Ardern. Her presence at the event hosted by India at the UN was a great gesture too. During our talks today we reviewed the full range of ties between India and New Zealand, which would benefit our citizens," Modi said in a tweet.

Both countries have strongly condemned and extended support to each other following the Pulwama and Christchurch terror attacks. India had also supported the joint New Zealand French initiative on Christchurch Call of Action.

Modi thanked Ardern for accepting his invitation to participate in the event "Relevance of Gandhi in the contemporary Times" held on the sidelines of UNGA during which the Gandhi Solar park was inaugurated.

The New Zealand Prime Minister informed Modi about their new strategic paper 'India 2022- Investing in the relationship', which is a continuation of the NZ Inc. India Strategy 2011.

Ardern noted that the Indian diaspora and students in New Zealand were an important bridge between the two nations and contribute to bonds of friendship between the two countries. Modi also met President of Estonia Kersti Kaljulaid both leaders had a detailed discussion on a broad spectrum of bilateral relations.

They discussed steps to deepen bilateral cooperation in the domain of e-Governance, Cyber security and Innovation.

"My interaction with President Kersti Kaljulaid was fruitful. Estonia is a valued friend, with whom India looks forward to expanding cooperation especially in IT and commerce," Modi tweeted.

The Prime Minister thanked Estonia for its support to India's candidature for the UNSC non-permanent seat for 2021-2022.

The meeting provided an opportunity to brief Estonia and to seek their views on enhanced opportunities for bilateral cooperation, thus further strengthening our existing friendly ties, the official release said.

"We had an excellent meeting, PM Charles Michel. We were able to exchange views on improving India's ties with Belgium and the EU. Thank you for the kind words on Mahatma Gandhi, who is a source of inspiration for millions across the world," Modi said in a tweet.

"Both leaders discussed ways to boost strategic ties and deepen cooperation in various areas including improving trade and connectivity," the PMO said in a tweet.