On the other hand, some of the women's rights activists still remain detained 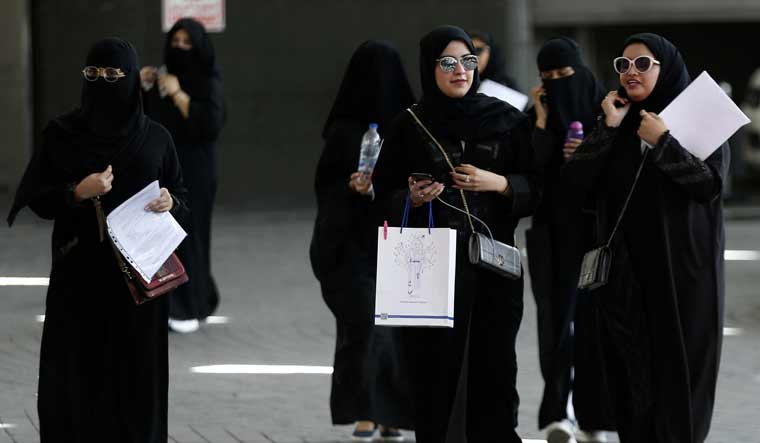 In 2018, Saudi Arabia lifted the ban on women driving. On Friday, the kingdom allowed women to travel without a male guardian's approval. The regulation allows women over the age of 21 to obtain passports and leave the country without their guardian's permission, according to reports.

The need for a male guardian to travel drew international censure and prompted many women to flee from the country. Saudi's Crown Prince, Mohammed bin Salman, seems to be slowly working towards trying to rid the country of its image if being an 'oppressor of women'. Or so, it seems. In the last few years it granted couple of more personal freedoms to women including making it legal for them to drive, allowing them to attend soccer matches in a public stadium and being named to prominent positions in government.

The Saudi crown prince took to power in 2015, and modernising the image of Saudi Arabia seems like an important part of his agenda. And yet, those who criticise the Saudi regime seem to be in trouble, like journalist Jamal Khashoggi who was vocal about his thoughts on the royal family. Some of the most famous examples of people being punished for dissent are arrests of activists Mohammad al-Qahtani and Waleed Abu al-Khair who crusaded for human rights. They both are currently in Saudi jail.

So, it might just be better to take the latest move to allow women to travel without approval of a male guardian, with a pinch of salt. Guardianship allowed men to exercise arbitrary authority over women. For a long time, mutawwa or the religious police were feared by women. If caught stepping out without a guardian, women would often be harassed by mutawwa. But over the years, Prince Salman has reduced their power. The powerful moral or religious police who could call out women for wearing bright nail polish or call out men for trying to interact with a non-related woman in a public place have gradually diminished with the different changes MBS has passed in the last couple of years. This is definitely being viewed as a relief by youngsters. Liberalisation seems like the logical way to go in a nation where at least half the population is under 25 and this is what MBS is aiming at.

"A passport will be granted to any Saudi national who submits an application," said a government ruling published in the official gazette Umm Al Qura. However, the woman would need to be of 21 years of age or above to obtain a passport without a guardian. In a one-off case last year, a Saudi court ruled in favour of a 24-year-old woman who challenged her father's decision to not let her have a passport. But until Thursday's ruling, she would have still required his permission to travel.

Guardianship is still needed for women to marry. Whether or not the wali system will be completely done away with, remains to be seen. But for now, this ruling is a big step towards liberalisation of women.

Women in the past have undertaken perilous attempts to escape overseas despite the reforms. They include 18-year-old Rahaf al-Qunun, whose live-tweeted asylum plea from a Bangkok hotel in January after she fled her Saudi family drew global attention. Later, two Saudi sisters who sought sanctuary in Hong Kong from what they called family abuse were allowed passage to a third country that was not named for their safety.

Saudi officials have expressed commitment to fighting guardianship abuse, but, this would require a fine balancing act as abolishing it in one stroke could mean severe backlash from arch-conservatives. On July 2019, singer Nicki Minaj pulled out of performing at a music festival in Saudi Arabia. "After careful reflection I have decided to no longer move forward with my scheduled concert at Jeddah World Fest," Minaj said "While I want nothing more than to bring my show to fans in Saudi Arabia, after better educating myself on the issues, I believe it is important for me to make clear my support for the rights of women, the LGBTQ community and freedom of expression,” she added.

So while the kingdom may have planned vision 2030, when it comes to certain human rights and recognition of the LGBTQ community, it still has a long way to go. Those engaging in same sex activity could be stoned to death in Saudi Arabia, making it one of the countries with the lowest acceptance for LGBTQ individuals.

Gay Saudi asylum seeker, Abdullah Bentalab was beaten up by his father when he saw a picture of Abdullah taking part in a pride march in London, where he went for the summer to learn English. On coming to the US with a student visa, he attempted suicide as he felt that he would have greater freedom that way.

Even now, dress code has to be followed by women in Saudi Arabia. They need to wear abayas with no embellishment, no slits and they should avoid wearing 'too much' make up. Even interacting with the opposite sex is restricted. Universities and other public places in Saudi have different entrances for men and women. Amusement parks, public transport and even park benches are segregated. Women still are not allowed to swim in a public pool.

So, more than being more about making life better for women, it seems like a move to rebrand the kingdom's image. This probably was viewed as an important move by the Prince since the country came under much flak over the death of journalist Jamal Khashoggi. Saudi also seems more keen to increase women's participation in the workforce. In August 2018, Saudi froze all new trade with Canada after the latter called for release of women activists who were detained by the regime for being dissidents. “I didn't call myself a reformer of Saudi Arabia. "I am the crown prince of Saudi Arabia and I am trying to do the best that I can do through my position,"he said in an interview once.