Ilhan Omar calls Trump 'fascist' as democrats rally behind her

We have said this president is racist, we have condemned his racist remarks: Omar 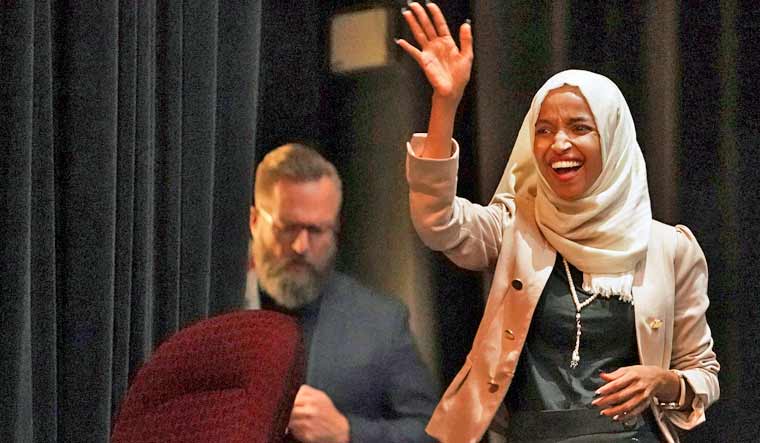 Donald Trump continued his racist attacks on the four Congresswomen Ilhan Omar, Alexandria Ocasio Cortez, Rashida Tlaib and Ayanna Pressley. Trump especially had it in for Omar who is not born in the United States. Trump went the distance and cried mocking chants of “send her back," with backing of supporters at North Carolina.

Ilhan Omar in turn has branded Donald Trump a "fascist". "We have said this president is racist, we have condemned his racist remarks," Omar, one of two Muslim women in Congress, said on Thursday. "I believe he is fascist."

At a rally in Greenville, North Carolina, chants of "Send her back!" and "Make America Great Again" erupted. Trump also attacked other members of the "Squad."

Alexandria Ocasio-Cortez, one of the Democratic congresswomen singled out for criticism by Trump, said "his rhetoric is endangering lots of people" and "creating a volatile environment."

Republican reaction has been more muted but some were speaking out. "The chants at last night's rally were offensive, and I'm glad the President has disavowed them," said Senator Mitt Romney, a Republican from Utah.

It is not surprising that Trump attacked Omar as most of his 2016 campaign was build on anti-Muslim sentiment.

"This is a disruptive distraction," said Pressley. "Don't take the bait." The Congresswomen at a press conferenceon July 16 had made it clear that instead of sparring with Trump, they are committed to working on issues such as healthcare and condemned the horrific conditions in migrant detention centers.

"I was not happy when I heard that chant," he said. "I didn't like that they did it, and I started speaking quickly,” Trump said at the Oval office. But he said he was not pleased by the taunts.