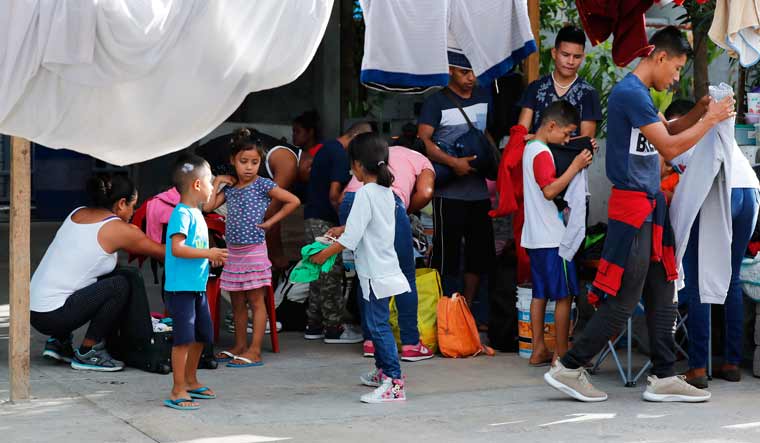 Migrants pack their bags as they wait to be taken to the U.S. border to apply for asylum, at the AMAR migrant shelter in Nuevo Laredo, Mexico | AP

United States administration has come up with a new policy to deny asylum to people showing up on the Mexican border after travelling through another country. And this threatens to exacerbate overcrowding at severely strained US immigration detention centers and makeshift holding areas.

As per the new rule, asylum-seekers crossing a third country on the way to the United States to first pursue safe-haven there. This however does not change the way asylum-seekers are initially processed once they are in US.

The Border Patrol housed 900 people in an area with capacity for 125 in El Paso, Texas, according to a report by the internal watchdog of the Department of Homeland Security. Pictures and videos from Vie President Mike Pence's visit Friday to McAllen, Texas, showing men crammed behind chain-link fences and women being held in smaller tents.

There has been a sharp drop in illegal border crossings owing to a seasonal decline due to summer. The Border Patrol has fewer than 10,000 people in custody, down from 19,000 in May, according to a US official who wished to remain anonymous.

Thousands of refugee families from Central America cross the US border, seeking asylum. Border holding facilities have been cramped beyond capacity.

According to immigrant rights groups and religious leaders, Guatemala, Honduras and El Salvador are poor countries, often wracked by violence and therefore an effort to keep them out amounts to cruelty.