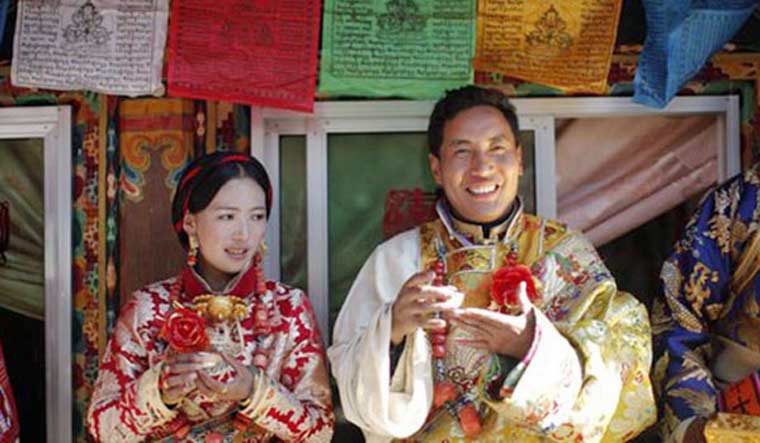 He is a Han and she a Tibetan and, in the best tradition of true love overcoming the biggest odds and the deepest hostilities, they rewrote the rules to become role models for ethnic unity in a restive land and also be officially recognised as "achievers".

Long Shi Zhong and Ba Sang Que Ba fell in love like many do but theirs was a romance with the hurdles built in. Fearing hostilities between the Han and Tibetan ethnic communities they belonged to, the couple had to wait for several years to get married, officials said.

In 2015, they finally did. And now Long and Ba, both in their early 50s, are symbols of ethnic unity in this prefecture-level city of the Tibet Autonomous Region (TAR) of China.

Their marriage has encouraged hundreds of young people to go for inter-community marriages, prompting the local government to confer the couple with the "national role model" award for ethnic unity.

A photo of Long and Ba finds place among achievers of Shigatse at a major community centre, which acts as a platform for governance at grassroots level.

"Our central government is pursuing a conscious policy of inter-community marriages to promote unity among various ethnic groups in Tibet and elsewhere," Ci Dan Yangji, a local government official, told a small group Indian journalists during a rare visit to Tibet at the invitation of China.

Another official added that Long and Ba set an example for many people in the society.

"Both of them waited for several years to get married. They were apprehensive of the backlash between the two communities. However, there has been a surge in marriages between people from the communities after Long and Ba set an example," he said on the condition of anonymity.

Ci Dan said around 500 families were registered with the community centre in Shigatse, which comprised 40 "mixed marriage" couples.

Relations between the Tibetan people and Chinese authorities came under severe strain after the Chinese army entered various parts of the plateau in 1950.

Tibet's spiritual leader, the 14th Dalai Lama, fled Tibet following a Chinese crackdown on a popular uprising in 1959. India granted him political asylum and the Tibetan government-in exile has since been based on Dharamsala in Himachal Pradesh.

Since 1959, Tibet has been witnessing periodic incidents of violence, unrest and protest against Beijing.

Critics of Beijing say China has been sending a large number of Han Chinese to Tibet in the last 60 years to outnumber the local population and dilute Tibetan cultural heritage.

However, Wang Neng Sheng, an vice minister ranked official in Tibet, rejected such criticism and said the Central government has been working to ensure unity among various ethnic communities and to preserve the rich cultural heritage of Tibet.

"The Tibetan people account for 92 per cent of the population in Tibet and the rest eight per cent are Han Chinese and people from other ethnic groups," he said.

China has a total of 56 ethnic groups.

Wang said the apprehensions that Tibetan people are turning into a minority are completely unfounded. The Chinese government, he added, is adopting a scientific approach for the development of various ethnic groups and population in Tibet and elsewhere.

There has been a view among followers of the Dalai Lama that China is systematically trying to suppress Tibetan culture, and bringing prosperity to the region to dissuade people to support the Dalai Lama who has been pressing for genuine autonomy for Tibet.

China asserts that Tibet has been its part since the 13th century and will remain so forever.