'Next Dalai Lama must be chosen within China; India should not intervene': Chinese authorities 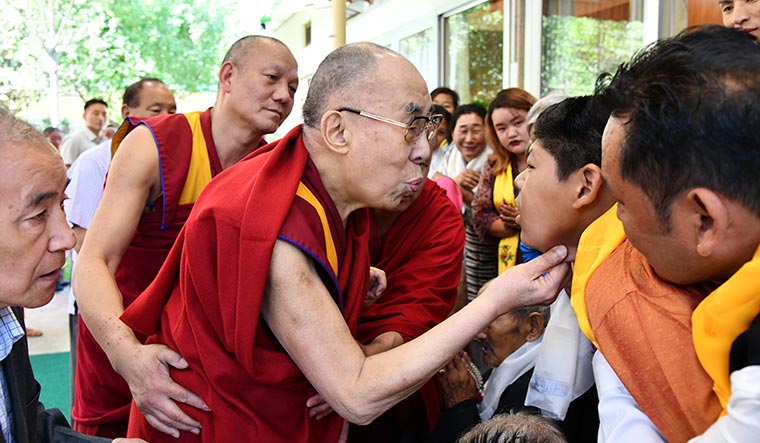 The successor of the Dalai Lama has to be decided within China and any interference by India on the issue will impact bilateral ties, Chinese authorities have said.

In first clear assertion on the sensitive issue, senior Chinese officials and experts said the reincarnation of the Dalai Lama must be approved by the Chinese government and the selection should take place within the country based on an over 200 year-old historical process.

The Dalai Lama is 84 years old now and the issue of his successor has gained prominence in the last couple of years in the wake of his health issues.

"The Dalai Lama's reincarnation is not decided by his personal wish or by some group of people living in other countries," he added.

Wang, the director general at the government of Tibet Autonomous Region, said the current Dalai Lama was recognised by Beijing and his successor must be found through the "draw of lots in golden urn process" within China.

The 14th Dalai Lama fled to India in 1959 following a crackdown on an uprising by the local population in Tibet.

India granted him political asylum and the Tibetan government-in exile is based on Dharamsala in Himachal Pradesh since then.

"It will be a major political difference that would impact bilateral relations and any wise political leader wouldn't do that," said Zha whose team advises central government on  policy issues for Tibet.

He was asked what will happen if India refuses to recognise the next Dalai Lama chosen by China.

"Since the reincarnation of the Dalai Lama is an important issue for China any friendly country or friend of China would not interfere or meddle on the issue," he added.

India has maintained its stand on the Dalai Lama.

"Government of India's position on His Holiness the Dalai Lama is clear and consistent. He is a revered religious leader and is deeply respected by the people of India. There is no change in that position. His Holiness is accorded all freedom to carry out his religious activities in India," Ministry of External Affairs spokesperson had told a media briefing in March last year.

Wang said the process of selecting the next Dalai Lama must follow two clear steps : "It must go to draw of lots in the golden urn  and the reincarnation must be recognised by the central government".

He said the "centrality" of the central government must be recognised and that any personal move by the current Dalai Lama on the issue is not going to be recognised by Chinese government or religious followers in Tibet.

"It was with the central government's recognition that the Dalai Lama became 14th Dalai Lama. Otherwise, he wouldn't have been in that position," said Wang.

He alleged that the Dalai Lama has been "inciting" and "misguiding" young Tibetan people for his political motives.

Asked about the Dalai Lama's comments that he was ready to accept Tibet as part of China, Wang said he has been resorting to political rhetoric without taking any action.

"He still believes that Tibet is an independent country. Without any concrete moves from his side, his words do not mean anything," Wang added.

Asked about assertion by Chinese authorities on the Dalai Lama's successor, an official in the Tibetan government-in excile called it a "ploy to politicise the issue of reincarnation."

"It will help them strengthen their rule and obliterate Tibetan identity, culture, language and way of life," he said.

Wang said there were around 10 rounds of discussions between private representatives of Dalai Lama and Beijing. The last round took place in 2011 in Beijing.

"The discussions were about the future of the Dalai Lama and did not include or touch on the topic of future of Tibet as a part of China's sovereign territory," Wang said.

The Indian government had issued a note nearly a year back to senior officials, asking them not to attend events organised by the Tibetan government-in-exile.

India has also been supporting the 'One China' policy, which states that Taiwan and Tibet are part of China's mainland. Beijing made the 'One-China' policy a prerequisite for countries to establish diplomatic ties with it.