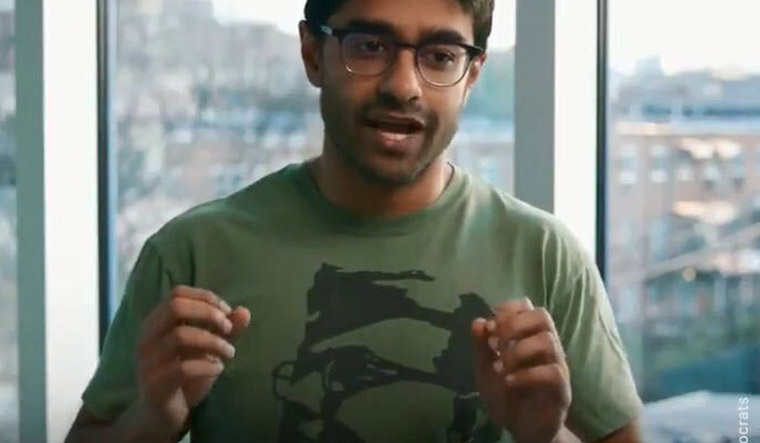 Alexandria Ocasio-Cortez is considered a rising star in US politics. Cortez, the young Representative for New York's 14th Congressional district, has been an outspoken opponent of the domestic and economic policies of President Donald Trump.

In recent days, however, Cortez has been facing a backlash from Republican supporters and Jewish groups after a video went viral of her chief of staff wearing a T-shirt featuring Subhas Chandra Bose.

Saikat Chakrabarti, the son of Indian migrants, is the chief of staff of Cortez and has played a key role in developing her policy proposals.

The video, incidentally, was made in December and has Chakrabarti, wearing a T-shirt with the image of Bose emblazoned on it, describing his work with Cortez. Like many other videos and images in the age of social media, the Chakrabarti video is in the headlines months later for what some may consider a minor detail.

The article said, “Bose enlisted tens of thousands of Indian men to support the Japanese invasion of British India in 1944 and help fight the British in Europe for Hitler. The Indian Legion Bose raised for Germany trained as a regiment of the SS... He also broadcast propaganda for Hitler on a radio network set up by Bose to encourage Indians to fight for freedom. Bose met with Hitler in Germany in 1942...”

The Jewish Journal quoted an office-bearer of the Simon Wiesenthal Center, which fights anti-Semitism across the world, who demanded an apology from Chakrabarti for the Bose T-shirt.

Associate Dean and Director of Global Social Action Agenda at the Simon Wiesenthal Center Rabbi Abraham Cooper told the Jewish Journal “while Bose may be considered a folk hero to some in India, it’s still inappropriate to wear such a shirt”.

“Running around with a T-shirt of a person who not only sat with Adolf Hitler, but who worked to keep World War II going—aiding and abetting both the Nazis and Imperial Japan—that’s not something I would be particularly proud of,” Cooper said. Cooper said Chakrabarti must apologise or should be fired as chief of staff of Cortez.

Pro-Republican handles on Twitter, not surprisingly, latched on to the controversy to level accusations of anti-Semitism against Cortez.

Indians on social media, however, took to defending Bose from accusations of being a “Nazi collaborator”. Ishaan Tharoor, son of Congress leader Shashi Tharoor, was one of them.

Ishaan, who writes for the Washington Post, tweeted, “Yes, Subhas Chandra Bose is a complicated figure who received support from Axis Powers, particularly Japan. To reduce his identity to that of a 'Nazi collaborator' is an insult to history and everyone’s intelligence.”