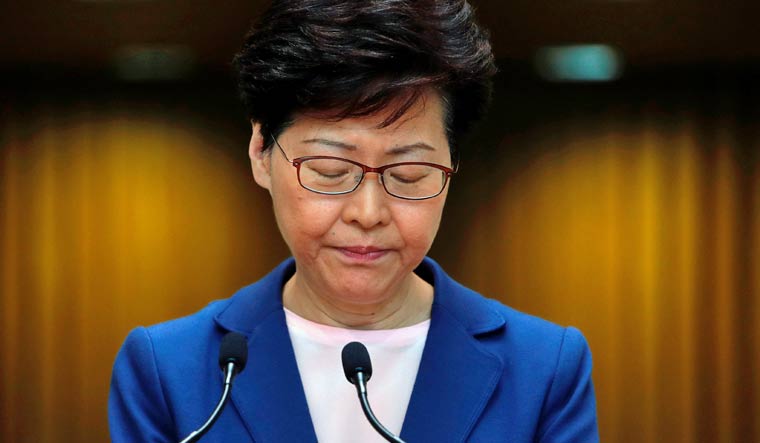 This is one of the worse crisis Hong Kong has faced with marches through the month, sporadic violent confrontations between police and pockets of hardcore protesters.

The protestors among other things are demanding resignation of Chief Executive of Hong Kong Carrie Lam and complete withdrawal of the extradition bill. They have morphed into a wider movement calling for democratic reforms and a halt to sliding freedoms in the semi-autonomous territory.

On Sunday, a peaceful protest was quietly dispersed by the evening, But, some protestors, refused to disperse and heckled at policemen, who then charged at them wearing riot gear. The clash ended with arrest of six protesters.

Lam admitted her administration's attempt to introduce the bill was a "complete failure".

Police have fired tear gas and rubber bullets while the parliament has been trashed by protesters — as Beijing's authority faces its most serious challenge since Hong Kong was handed back to China in 1997.

Lam's words about the bill are "another ridiculous lie" tweeted leading democracy activist Joshua Wong, who was recently released from jail for his role in protests in 2014.

"The bill still exists in the 'legislative programme' until July next year." The Civil Human Rights Front — which has organised some of the mass rallies — said it would announce fresh protests over the coming days.

Analyst Dixon Sing said her words would do little to defang the protest movement. "Trust in the government has sunk to such a record level that if there's not a clear fulfillment of the (key) demands, the majority of the Hong Kong public will still be very sceptical of the government's sincerity," he said.

Authorities have  resisted calls from protesters for the city's leader to be directly elected by the people.