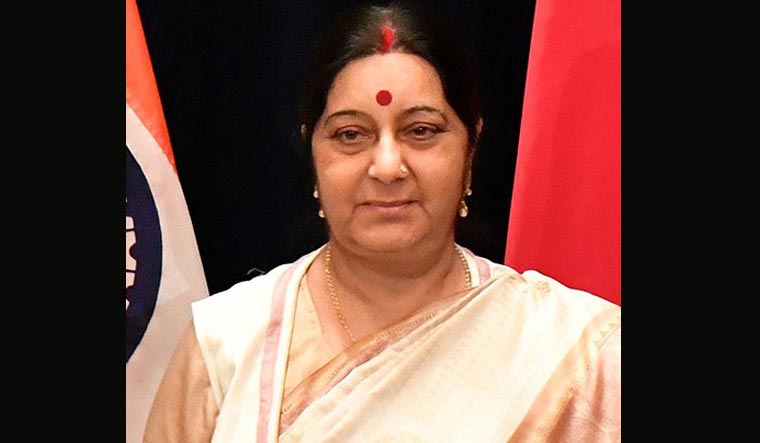 External Affairs Minister Sushma Swaraj arrived here in the Kyrgyz capital on Tuesday to attend a two-day meeting of the Shanghai Cooperation Organisation (SCO) during which several pressing issues including the threat of terrorism are expected to be discussed.

Swaraj was given a traditional welcome on her arrival here.

The External Affairs Ministry in New Delhi said Monday that the Council of Foreign Ministers (CFM) will exchange views on topical issues of international and regional importance, besides reviewing the preparation for the SCO Summit in Bishkek from June 13-14.

"External Affairs Minister Sushma Swaraj will be representing India in the meeting of Council of Foreign Ministers (CFM) of Shanghai Cooperation Organisation to be held in Bishkek on May 21-22," it said.

India became a full member of the the China-dominated grouping in 2017 and New Delhi's entry has increased the bloc's heft in regional geo-politics, besides giving it a pan-Asian hue.

India is also keen on deepening its security-related cooperation with the SCO and its Regional Anti-Terrorism Structure (RATS), which specifically deals with issues relating to security and defence.

Swaraj's programme in Bishkek will include a joint call of SCO Foreign Ministers on Kyrgyz President Sooranbay Jeenbekov.

India was an observer at the SCO since 2005 and has generally participated in the ministerial-level meetings of the grouping which focus mainly on security and economic cooperation in the Eurasian region.

Along with India, Pakistan was also granted the SCO membership in 2017.

The SCO was founded at a summit in Shanghai in 2001 by the presidents of Russia, China, Kyrgyz Republic, Kazakhstan, Tajikistan and Uzbekistan.