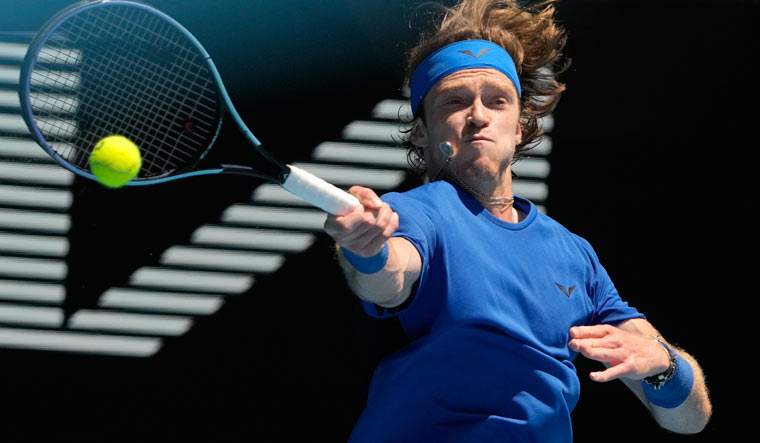 Fifth-seeded Andrey Rublev advanced to the fourth round of the Australian Open for the third time in four years with a 6-4 6-2 6-3 win over Dan Evans in Melbourne on Saturday.

Rublev, who will play ninth-seeded Holger Rune in the last 16, also thanked Evans for helping him by giving him a banana late in the first set.

Danish teenager Rune beat Ugo Humbert 6-4 6-2 7-6 (5) to move into the fourth round on just his second visit to Melbourne Park.

Rune had a nasty-looking fall on the second point of the second set when his right ankle slipped. He had his right wrist checked but seemed unaffected as he claimed a convincing victory.

Fifth-seeded Aryna Sabalenka extended her streak to seven matches as she beat Elise Mertens 6-2, 6-3 to reach the fourth round. The Belarusian player hit 32 winners to beat Mertens, with whom she won the doubles title in Melbourne in 2021.

Sabalenka will now play Belinda Bencic after the Swiss player reached the fourth round for the first time since 2016, beating Camila Giorgi 6-2 7-5 on Rod Laver Arena.

The 12th-seeded Bencic was broken when serving for the match at 5-4 but she broke serve in the following game and then served out to love for victory.

Bencic won the warm-up event in Adelaide before the Australian Open and has won eight matches in a row.

Former top-ranked Karolina Pliskova also reached the last 16 with a 6-4 6-2 win over Varvara Gracheva. Pliskova, who last made the second week in Melbourne in 2019, did not face a break point.

Pliskova next plays Zhang Shuai, who ended the run of American qualifier Katie Volynets 6-3 6-2. Donna Vekic advanced to the fourth round for the second time in three years with a 6-2 6-2 win over Nuria Parrizas Diaz of Spain.