Morocco have been the biggest surprise of the tournament 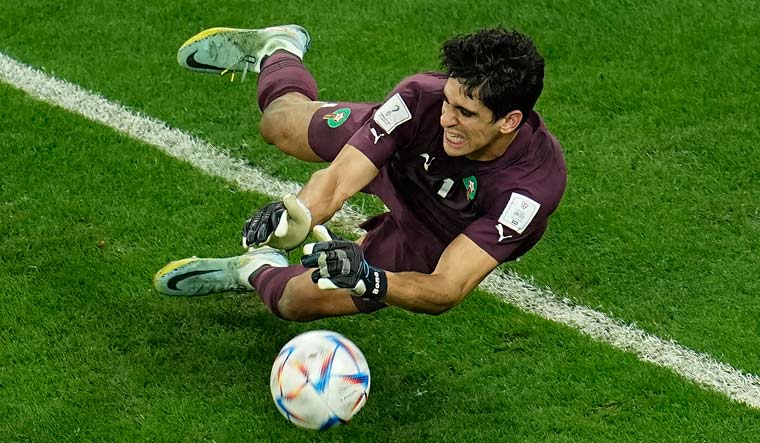 Morocco's goalkeeper Yassine Bounou saves a penalty kick during the World Cup round of 16 soccer match between Morocco and Spain, at the Education City Stadium in Al Rayyan, Qatar | AP

Morocco advanced to the World Cup quarterfinals for the first time, beating Spain 3-0 in a penalty shootout on Tuesday.

After 120 minutes of the goalless match, 31-year-old goalkeeper Yassine Bounou stopped the penalties from Carlos Soler and Sergio Busquets, making Morocco the only Arab and African nation left in the FIFA World Cup 2022 in Qatar.

Morocco have been the biggest surprise of the tournament and will face Portugal.

After the victory, Bounou who has been playing with Sevilla since 2019-20 said: "On behalf of all the players, I want to thank the fans who helped us in this task. I congratulate all the players and I offer this gift to all the Moroccan people."

In 2018, Bounou was one of the stars who played a tournament in Kochi. He was with Spanish LaLiga side Girona FC as part of a three-team pre-season friendly tournament. Besides Kerala Blasters, the hosts, Australia's Melbourne City FC were also there. Girona were a new entrant to the LaLiga, which was dominated by Real Madrid and Barcelona.

The Catalans won the opening match at the Jawaharlal Nehru International Stadium in Kochi 6-0. Bounou did make at least one notable save that night. However, a few days later when Kerala Blasters hosted Girona, Bounou was rested. Nevertheless, Girona won the match 5-0 to win the pre-season event.