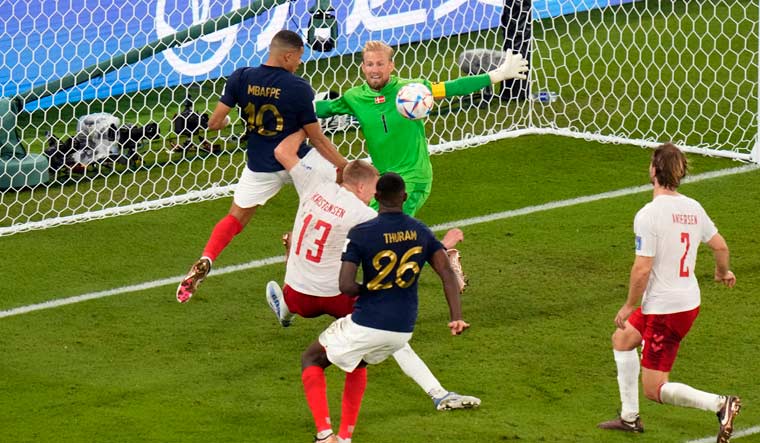 Kylian Mbappe scored twice in the second half as defending champions France beat Denmark 2-1 in their Group D match on Saturday and became the first team to reach the last 16 of the World Cup.

After a goal-less first half, Mbappe put the French ahead in the 61st minute, crowning a superb high-speed French counter with a bouncing first-time finish from Theo Hernandez's clever pull-back. However, Denmark scored a quick equaliser through Andreas Christensen who pounced on a flick-on to head the ball past Hugo Lloris in the French goal.

The game looked set to end in a stalemate until Mbappe popped up in the 86th minute at the far post to cushion home an Antoine Griezmann cross from close range to restore the lead to send the travelling French fans into raptures.

Mbappe scored four goals when France won the World Cup four years ago, including one in the final. He now has 31 goals for France, moving him one ahead of Just Fontaine the all-time leading scorer at a single World Cup with 13 goals at the 1958 tournament.

Saturday's result left Les Bleus on top of Group D with six points from two games, three ahead of Australia who beat Tunisia in another match on Saturday. France will take on Tunisia in the final round on Wednesday.

Earlier, France had secured a comfortable 4-1 win against Australia in their opening fixture. Denmark, on the other hand, played a 0-0 draw with Tunisia.