Qatar 2022: Why Argentina need Lisandro "the butcher" Martinez to survive

Centre-back Martinez is a tailor-made solution for Argentina's woes 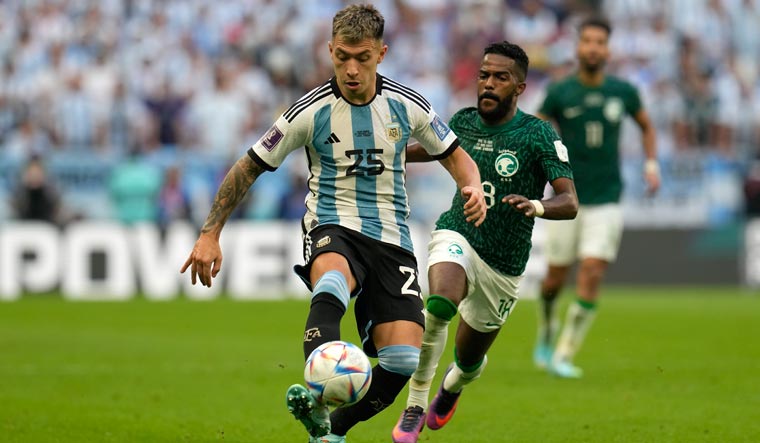 There were a few firsts in Argentina's loss to Saudi Arabia that drive home the magnitude of the result.

There was another first which is more relevant to the upcoming matches. Argentina, reportedly, became the first team in World Cup history to name four players aged 34 or more in its starting 11. Off the four, Lionel Messi, is indispensable, despite what may have been perceived as a lacklustre performance yesterday. And both Angel Di Maria and Nicolas Otamendi performed better than younger teammates. Papu Gomez was subbed off for Julian Alvarez, 22.

The ageing squad was not able to deal with the physicality and speed of the Saudi Arabian players. And, therefore, in the team's next match against an energetic Mexico team, Alvarez has to start ahead of Gomez. He was not outstanding after coming on against Saudi Arabia, but this was because the team had gone more defensive after taking the lead. If he starts, the Manchester City attacker can offer more width, pace and penetration from the left.

The most important change required, however, is in defence. It was 24-year-old Cristian Romero who performed badly against the Asian side. Therefore, he should be replaced by fellow 24-year-old centre-back Lisandro Martinez, who, incidentally, replaced Romero in the match against Saudi Arabia. The Manchester United centre-back has been phenomenal for his club (except for a couple of bad performances). Crucially, he has had three separate partners at club level in Raphael Varane, Victor Lindelof and Harry Maguire. Martinez has adapted to playing with the vastly different styles of his three partners with ease and has been one of the best centre-backs in the Premier League this season.

Moreover, he is left-footed and brings a natural balance to the backline.

ALSO READ: Why so much added time at Qatar 2022 World Cup

Martinez is also supremely confident on the ball and is a superb passer. While he is not the fastest, his reading of the game is excellent and "the butcher", as the nickname suggests, has an aggressive style of play that unsettles opponents.

Therefore, against Mexico, Martinez should start with Otamendi. There can even be a case made to start Romero and Martinez against the speed of Mexico, but that is not likely to happen. If Romero can recover mentally from his performance against Saudi Arabia, he can still be a valuable squad player when Otamendi needs rest or if Martinez is injured or suspended.

There is not too much time in the World Cup group stages and head coach Lionel Scaloni must get his team selection spot on against Mexico. The silver lining from what was a dark day in Argentina's football history is that Mexico and Poland played out a draw. This means that Saudi Arabia are top of the group with three points, followed by Poland and Mexico on one point each (Poland are second by virtue of a better fair play score). Argentina can get back into the mix with a win in the next match.

Also, while Saudi Arabia's win was well-merited, the team may not be able to replicate the performance against Poland and Mexico. Both teams have very different styles of play compared with Argentina and both coaches would have had a long look at the Saudi performance against the South Americans. Therefore, if Saudi Arabia are adventurous in their two next matches, the skill gap may result in consecutive losses. Playing for draws will also be risky in World Cup groups.

The first match day has blown Group C wide open. The predictions that Argentina would finish top and Mexico and Poland would battle it out for second place, ahead of Saudi Arabia languishing in fourth, now look amateurish. But, it is what we have come to expect from World Cups. And Saudi Arabia will have the gratitude of neutrals for making a boring looking group so exciting.

Only one thing is for sure. Argentina cannot slip again. Easier said than done, considering the pressure the team is under. But, this is not unprecedented. Argentina had lost the first match of the 1990 World Cup to unfancied Cameroon before rallying to reach the final. Spain, in 2010, won the World Cup after losing the opener. As Wayne Rooney said on Sports 18, "The important thing is they don't panic. They have a good team. I am sure we will see a good reaction. They are a good team... more than capable of winning the next two games."