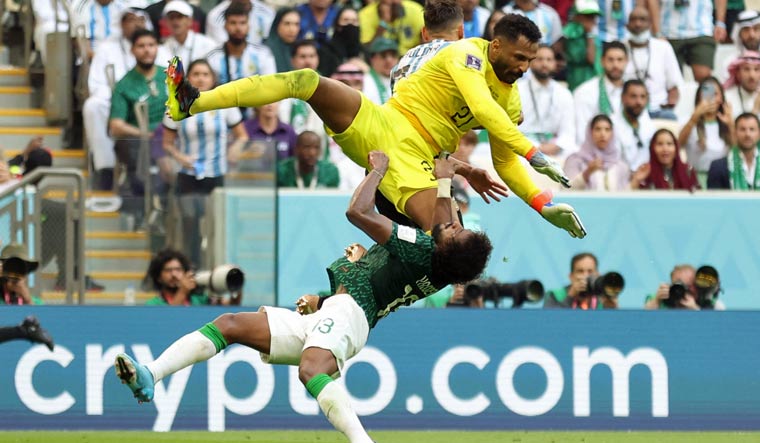 On a day Saudi Arabia saw a historic 2-1 win over Argentina in their World Cup opener, they were dealt with a heavy setback. Saudi Arabia goalkeeper Mohammed Al-Owais accidentally kicked his teammate Yasser Al-Shahrani. As a result, Al-Shahrani suffered a horrific injury in the jaw and internal bleeding during stoppage time. The 30-year-old defender had to be stretchered out of the game during the closing moments of the match. Referee Slavko Vincic added eight minutes of time after Al-Shahrani's injury. He was substituted by Mohammed Al Burayk.

Thankfully, a medical team swiftly attended to Al-Shahrani. He appeared to be giving a thumbs-up as he was being carted away. Al-Owais was one of his team's heroes-- he pulled off numerous saves, helping his team pull off a stunning victory. Saudi's Crown Prince Mohammed Bin Salman ordered that the player be taken to Germany for treatment, Gulf Today reported.

Lionel Messi gave Argentina a lead in the first half with a penalty shot. The underdogs turned things around with two quickfire goals from Saleh Alsehri and Salem Aldawsari inside eight minutes of the second half.

"One for the books," Saudi Arabia coach Herv Renard told AP. "This is football. Sometimes things are completely crazy."

"All the stars aligned for us," said Renard, who won the African Cup of Nations as coach of Zambia in 2012 and then again with Ivory Coast in 2015.

"We made history for Saudi football," Renard said. "It will stay forever. This is the most important. But we also need to think about looking forward because we still have two games that are very very difficult for us."