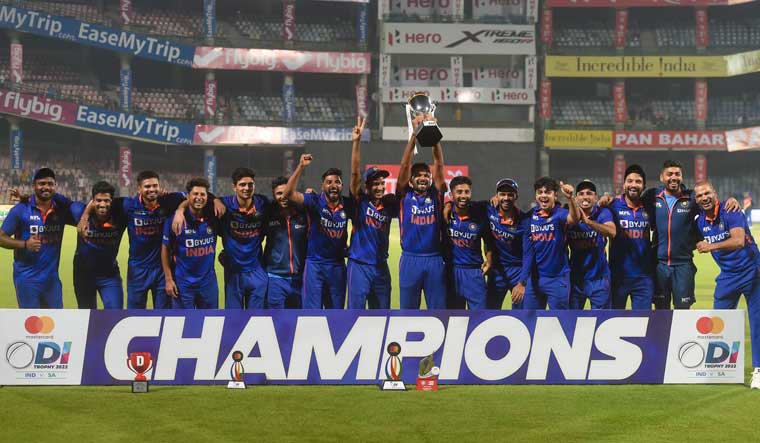 Indian players pose with the trophy after winning the third and final ODI match against South Africa, at the Arun Jaitley Stadium in New Delhi | PTI

India gave a good account of their enormous depth as a young and inexperienced side stunned a strong South Africa unit by seven wickets in third ODI in Delhi on Tuesday to secure a memorable series win.

The spin trio of Washington Sundar (2/15), Shahbaz Ahmed (2/32) and Kuldeep Yadav (4/18) picked the right lengths on a slow Kotla pitch to bundle out South Africa for 99, the Proteas lowest ODI total against India.

The series loss further jeopardised South Africa's chances of a direct qualification for the ODI World Cup next year.

Pacer Mohammad Siraj (2/17) too continued his good run to make a strong case for his inclusion in T20 World Cup squad.

While Washington and Shahbaz got wickets up front, left-arm spinner Kuldeep, who missed out on a hat-trick, cleaned up the tail.

The quality of the Indian white-ball squad was on full display in the series as the second-string team came from behind to clinch the three-match series 2-1.

The Indians, who looked in a hurry to finish the match, lost a bit of momentum after the wickets of Dhawan, whose woeful run in the series continued as he was run out for eight, and Ishan Kishan (10).

However, Shreyas Iyer (28 not out) continued his stellar run as he whacked three boundaries and two sixes including a match-winning maximum to steer India to victory after Gill was trapped leg before with three runs needed.