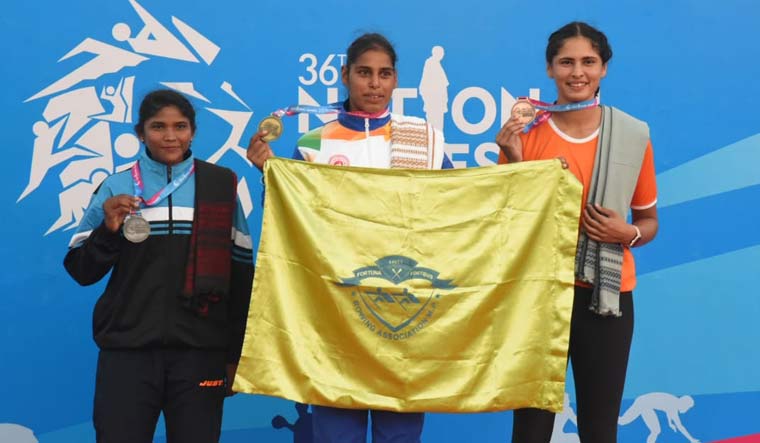 Many a time certain moments can become a life changer. For Khushpreet Kaur, a double gold medalist in rowing at the 36th National Games being held in Gujarat, the turning point was when she was denied permission to sit in a single scull.

Hailing from Bhatinda in Punjab, Khushpreet was initially training in hammer and discuss throws.

The 24-year-old told THE WEEK that four years ago when she went to Chandigarh to learn swimming, she was fascinated by the boat (single scull). “I did not know swimming and that was the reason I had gone to learn swimming. I had never sat on a single scull. But, I was not allowed to sit in it,” she recalled.

For Khushpreet, this moment changed it all and she decided to take up rowing and leave behind the hammer and discuss throws that she had already been practicing for five years. “I had won medals at the state levels but I decided to change the game. My family was supportive,” she said.

She started training at a small club in Punjab. During that time she also learnt about some trials at famed Bhopal Academy in Madhya Pradesh. Since 2019 she has been training in the Upper Lake in Bhopal.

“I train for more than six hours a day, under the guidance of coach Dalvir Singh Rathore. The training is split in two parts during the day – one in the morning and the other in the evening,” she said.

An undergraduate student, Khushpreet made it to the Indian team for the Asia-Oceania Olympic qualifications in 2021. She did not earn an Olympic quota but impressed one and all by finishing 5th in Single Sculls category.

Khushpreet’s immediate aim is to represent India in the Asian Games. “Each athlete wants to represent one’s country,” she remarked.

She admits that hard work was involved in hammer and discuss throws as well. “One should keep working hard. It pays off some time, somewhere in your life,” Khushpreet said.