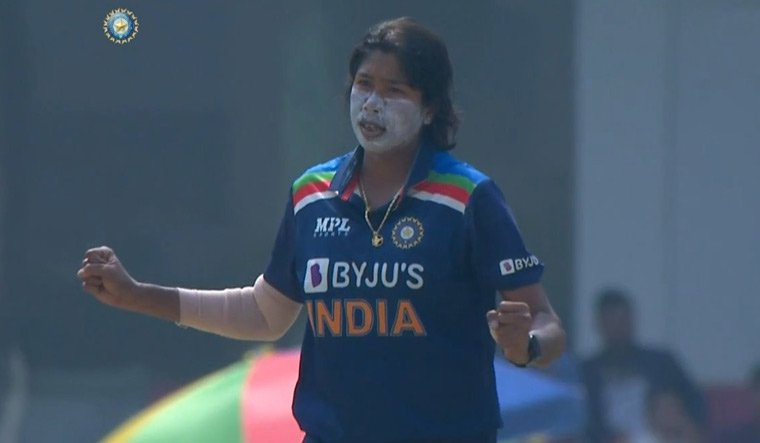 Not being able to win an ODI World Cup will be her "only regret" in an otherwise sterling two-decade career, said India's fast bowling great Jhulan Goswami on the eve of her final international game on Saturday.

Goswami will retire after the third ODI against England at the iconic Lord's on Saturday.

An emotional Goswami said she is grateful to the game for giving her name and fame but ending second best during the 2005 and 2017 editions of 50-over World Cup will remain an un-ticked box.

"I have played two World Cup finals but couldn't win the trophy. That remains my only regret because you prepare for a World Cup for four years. There is a lot of hardwork. For every cricketer, it is a dream-come-true moment to win a World Cup," the 39-year-old right-arm pacer said on the eve of her final international match.

"When I started I never thought of playing for such a long time. It was great experience. I am fortunate to play the sport. Honestly, coming from a humble background and a small town like Chakdah (in West Bengal's Nadia district) I didn't know anything about women's cricket," said the legend.

Goswami said receiving the India cap was the most memorable moment of her cricketing journey.

"My best memory is when I got the India cap and bowled the first over because I never imagined (that I will play for India). The journey was difficult as I had to travel for two-and-half hours by local train one way every day for training."

She recollected how the 1997 Women's World Cup final between Australia and New Zealand at the Eden Gardens, watched by close to 90,000 people, fuelled her ambitions.

"In 1997, I was a ball girl at the Eden Gardens where I saw my first women's World Cup final. From that day, my dream was to represent India," she said.