The wrestler, who won bronze in women's 68 kg freestyle category, represents UP now 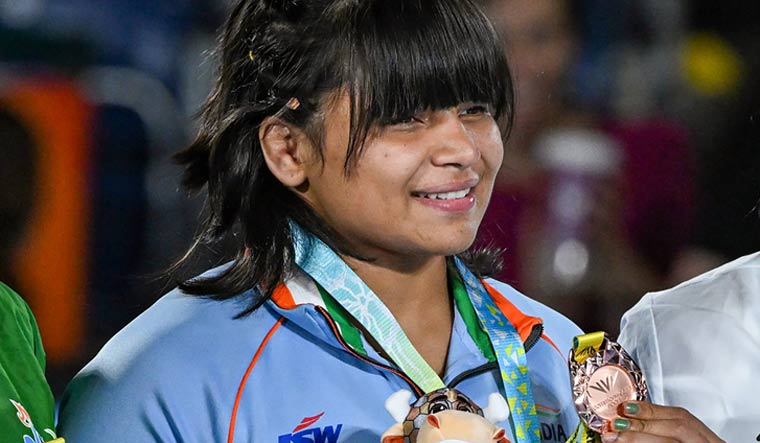 Days after alleging that she never got any help from the Delhi government despite being a resident and winning several medals, Divya said she met Kejriwal in 2017. “I met with CM Kejriwal after winning a medal in Asia. He assured me of help if I gave him a letter in writing. I did, but he never got back to me. He didn't help me in any way - with nutrition, travel, nor other expenses.”

“I have been fighting kushti (wrestling) for so long. Nobody would pay me if I fought with girls. So, I fought with boys to keep up my nourishment. By 2017, I had won Delhi 58 medals,” she was quoted as saying by ANI.

Talking about the switch from Delhi to Uttar Pradesh, Divya said, “I come from extreme poverty; had no money to travel, would sit next to train toilets in general bogie while travelling for competitions. Delhi govt never helped us. I started fighting from UP in 2018.

“In 2019, UP govt gave me the Rani Laxmi Bai award. In 2020, they gave me a life-long pension. Yesterday, they announced Rs 50 lakh and a gazetted officer rank post. UP govt helped me; even the Haryana govt did. But Delhi never came to help,” she said.

Kakran won bronze in the women's 68 kg freestyle category in Birmingham. Kejriwal was among those who congratulated her.

But, in a series of tweets on Sunday, the wrestler said, "I thank Delhi CM from the bottom of my heart for congratulating me on my victory. I have a request. I have been living and practising in Delhi for the last 20 years, but I neither received any prize money nor did I get any help from the state @Arvind Kejriwal," Divya tweeted in Hindi.

"I request you that I be felicitated in the same manner in which you honour other Delhi wrestlers even if they represent other states," she said in another tweet.

The AAP government said in a statement, "Delhi government respects all sportspersons of the country and prays for their bright future. Currently, Divya Kakran plays for Uttar Pradesh. If she had played from Delhi or she had been part of any sports scheme of the government or she has applied in any such scheme, the government will surely look into it."