The Men in Blue won the first ODI by 3 runs 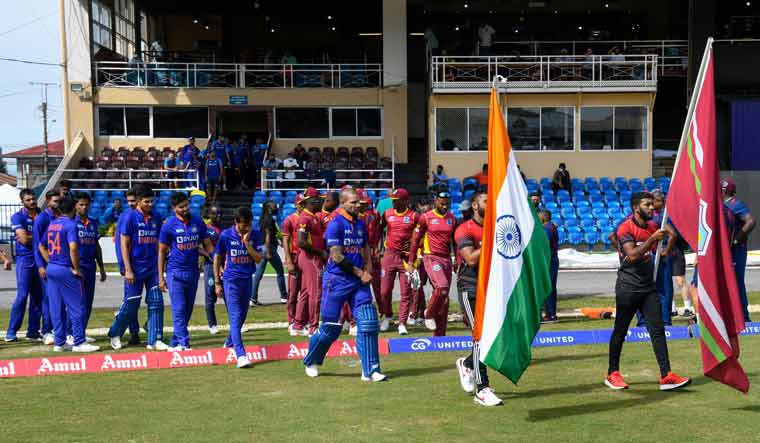 Shikhar Dhawan leads the Indian team on to the field during the first ODI match between West Indies and India at Queens Park Oval, Port of Spain, Trinidad and Tobago | AFP

Stand-in skipper Shikhar Dhawan will again look to make a statement as the Indian team, made up of fringe players, take on the West Indies in the second ODI in Port of Spain on Sunday.

Having won the first game by three runs, another victory will give India a successive ODI series win in the Caribbean.

Be it Dhawan and comeback man Shubman Gill's aggressive opening stand, or Mohammad Siraj's emergence as the leader of the bowling attack in the absence of the experienced Mohammed Shami and Jasprit Bumrah, India ticked all the boxes on Friday to go 1-0 up in the three-match series.

First up, it was about Gill as the highly-rated opener, returning to the ODI fold after more than 19 months, seized the opportunity with both hands with a career-best 64.

Picked ahead of Ruturaj Gaikwad and Ishan Kishan, Gill made batting look easy when most of them struggled after the ball got softer at the Queen's Park Oval.

Throughout his knock, he scored at a run-a-ball and smashed six boundaries and a couple of sixes, and it took a run out to end his stay in the middle.

It is up to Gill to convert his fine starts into big knocks, and he would certainly look to do just that and cement his place in the team.

Dhawan played the perfect second fiddle to Gill as the opening stand was worth 119 from 106 balls, but the senior batter narrowly missed out on his 18th century.

With Shreyas Iyer too finding some form with a half-century, it was a perfect top-three act by the Indian team, but a middle-order collapse followed and India settled for 308 for seven after being in a position to go beyond 350.

In the middle-order, the spotlight would be on Sanju Samson the batter as he once again failed to make use of the opportunity at this level, returning with an 18-ball 12.

The Kerala stumper, however, made up for his lack of runs with a stunning boundary save at the death, which played a part in India pulling off a win in the last-ball of the match with Mohammed Siraj defending 15 runs.

On Sunday, the likes of Suryakumar Yadav, Samson, Deepak Hooda and Axar Patel would like to deliver.

Dhawan pulled off a surprise in the absence of the injured Ravindra Jadeja, making part-time spinner Deepak Hooda bowl ahead of specialist Yuzvendra Chahal inside the first 20 overs.

Chahar returned wicket-less but he was the most economical (4.40) bowler of the day for the Indians, finishing with 0/22 from his five overs and forcing the West Indies to play catch up.

Siraj stood out as the pace spearhead dismissed Nicholas Pooraj in the middle overs and returned at the death with his perfect yorkers.

With the series on the line, the West Indies would look to put an end to their losing streak in ODIs which has now stretched to seven matches, including a 0-3 loss to Bangladesh in the preceding rubber.

The series is not part of the ICC World Cup Super League, and the West Indies have an opportunity to play without the pressure of the standings.

The last time India toured the West Indies for an ODI series, the Men in Blue emerged 2-0 victors, with one match washed out due to rain.

The ODI series will be followed by a five-match T20I series, featuring an almost full-strength Indian team.