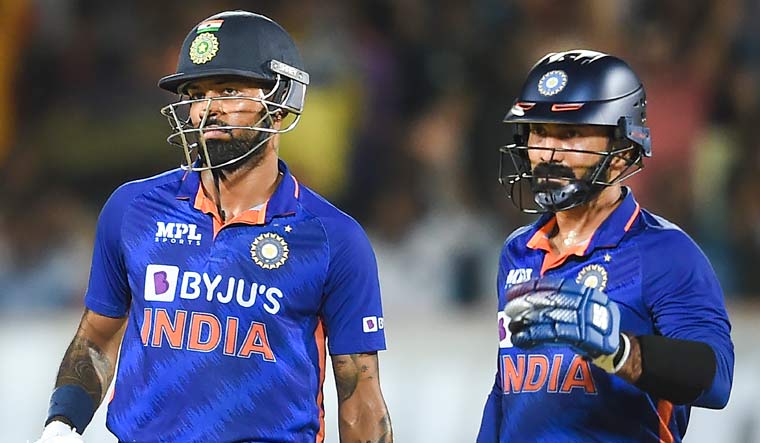 Dinesh Karthik and Hardik Pandya during the fourth T20I match between India and South Africa, at Saurashtra Cricket Association Stadium, in Rajkot | PTI

India's star all-rounder Hardik Pandya has expressed his admiration for Dinesh Karthik, saying his resurrection from obscurity is an inspiration for many in and outside the team.

The veteran wicketkeeper smashed his maiden T20I fifty to help the hosts secure an 82-run victory over South Africa in the fourth T20 International on Friday.

During a chat with Karthik, the video of which has been uploaded by the BCCI on its website, Pandya recalled his past conversations with the seasoned campaigner, who is going through a dream run with the bat.

"I remember the conversation you were having when you were not in the scheme of things, a lot of people counted you out," Pandya told Karthik during the chat.

India were struggling at 81/4 in the 13th over when stand-in skipper Pant was dismissed for 17. It brought Karthik and Pandya together and the pair revived the Indian innings with a brisk partnership of 65 runs.

"I remember those conversations. You told me then that my goal is to play for India again and the goal is to play this World Cup, I am going to give it my everything, and seeing you achieve that is very inspirational.

"A lot of people are going to learn new things. Well done my brother, very proud of you," Pandya said.

Karthik smashed nine fours and two sixes in his entertaining 55-run knock, Pandya made 46 off 31 balls to prop up the India innings.

The series decider will be played at the M. Chinnaswamy Stadium in Bengaluru on Sunday.