India had already qualified for the Asian Cup Finals 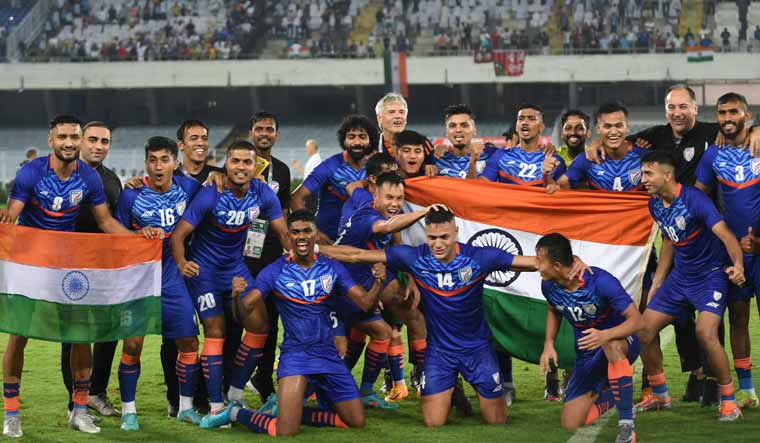 Indian players and coaching staff celebrate after beating Hong Kong in the AFC Asian Cup Qualifiers in Kolkata, to top the group and qualify for the Finals | Salil Bera

Told to hang up his boots after a medical condition, Anwar Ali's persistence and optimism in the face of seemingly insurmountable odds paid rich dividends in Kolkata on Tuesday.

Thanks to goals from Anwar, Sunil Chhetri, Manvir Singh and Ishan Pandita, India capped off their historic AFC Asian Cup qualification campaign in style, sweeping aside a strong Hong Kong side 4-0 under heavy rains at the Salt Lake Stadium.

Igor Stimac's side brought out its A game on a stormy night and started off with a blitz as Anwar (2nd) and Chhetri (45') gave India a 2-0 lead.

It was then a tale of super subs as Manvir (85th) and Pandita (90+3rd) came off the bench to complete the rout and help India (nine points) top group D with three wins on the trot, ahead of Hong Kong (six).

The Blue Tigers raced to a 1-0 lead with the 21-year-old centreback Anwar scoring his maiden international goal four years after his career nearly ended on health grounds.

The 2017 Under-17 World Cup star, whose career had been put on hold after being diagnosed with a rare heart disease (Hypertrophic Myocardiopathy), scored from a short Ashique Kuruniyan corner with a strike into the top corner.

The versatile defender, playing alongside Sandesh Jhingan, not only made his presence felt in the backline but also made some fluid moves up front.

The talismanic Chhetri doubled the lead just before the break from a 30-yard freekick to bring up his fourth goal of the tournament.

Jeakson Singh floated in a brilliant freekick as the skipper controlled it brilliantly with a deft first touch before calmly slotting it home to notch his 84th international strike that saw him go level with Hungarian great Ferenc Puskas in the chart for the all-time leading international scorers.

Late into the second-half, it was Brandon Fernandes who initiated the move from the right and played a quick 1-2 with Roshan Singh before Manvir found the target.

On song, India attacked on the counter and a cross from the right from Manvir was converted by Pandita.

More than eight hours before their face-off, both the teams confirmed the Asian Cup Finals berth, courtesy Palestine's 4-0 win over Philippines who were eliminated after finishing as the worst runners-up from the six groups.

Playing without any pressure, Stimac's side made two bold changes by bringing in Sahal Abdul Samad and Udanta Singh in the starting XI in place of Liston Colaco and Manvir.