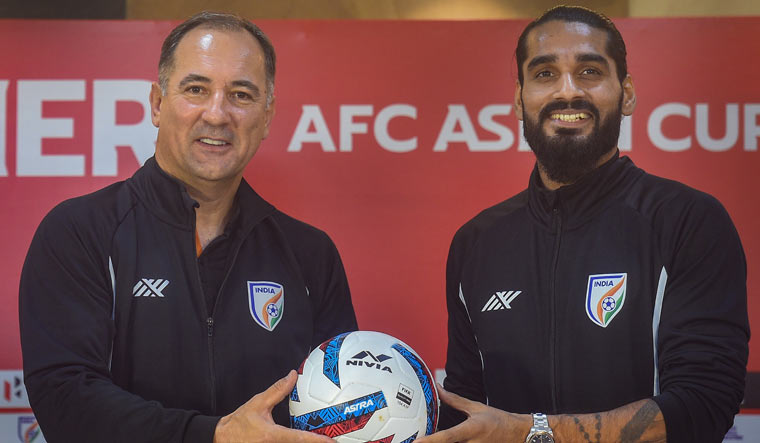 Skipper Sunil Chhetri will get a chance to bolster his tally of 80 international goals as the Indian team gears up to steamroll 171st-ranked Cambodia on Wednesday in its bid to make a fifth appearance in AFC Cup tournament proper.

Cristiano Ronaldo (117 goals from 188 games), Lionel Messi (86 from 162 games) have been on a scoring spree and no wonder at his level, the Indian talisman would like to ride the roughshod over Cambodia, Afghanistan (150th) and Hong Kong (147th).

While no one is comparing the international levels at which they operate, briefly surpassing Lionel Messi won't be a bad feeling for the 37-year-old.

With the next Asian Cup slated in late 2023 or early 2024 after the pull-out of China, Chhetri, who will complete 17 years in international football, might see this tournament as the 'final frontier' in his illustrious career.

"I want to qualify. If I'm not there, my country will be there. So, either I'll be having a beer and watching Udanta sprint, or you having a beer and I'll be sprinting there. But we want to be there," Chhetri made his intention clear ahead of his 126th international appearance.

This is a tournament which gives India the best chance to qualify for the Continental trophy without much fuss but if there is a slip-up against lowly-ranked nation, Chhetri or coach Igor Stimac will have little room for justification.

The Blue Tigers under Stimac did not have a perfect build-up to the continental showpiece, having lost all their three international friendlies arranged in the lead-up to the qualifiers.

In between they endured a shameful 1-2 defeat against Indian Super League side ATK Mohun Bagan, won 2-1 against I-League All Stars and were held to a 1-1 draw against Bengal, the Santosh Trophy runners-up of the season.

It's been more than seven months since they won a match at the international level - a 3-0 win against Nepal in the SAFF Championship final on October 16, 2021.

The recent results have proved to be a setback for the Stimac-coached side, which put up some gritty shows in the World Cup Qualifiers against Asian heavyweights Qatar (goalless draw) and Oman (1-2 loss after leading till 81st minute).

Up against an 'unknown entity' in Cambodia, Chhetri conceded that half the battle will be lost if they don't do well against the minnows.

"As of now, we are just thinking about Cambodia, watching as many videos as possible of them. Once we are done (with them), then we think about Afghanistan. No doubt, Afghanistan are also strong."

Compared to Indian build-up, the 'Angkor Warriors', who have qualified for the Asian Cup only once 50 years back in 1972, come here with a 2-1 win over Timor-Leste in a home friendly.

With their Japanese tactician duo of Ryu Hirose and Keisuke Honda at their helm of coaching affairs, the Cambodians will look to surprise the home-backed Indians.

From an Indian point of view, the biggest setback for Stimac in the recent past has been the injury to striker Rahim Ali, who started forming a strong attacking force with the livewire Chhetri.

Just when he started to fill in the vacuum created by Jeje Lalpekhula, Ali is forced out with a muscle injury as Stimac is forced to look for an alternate combination with little success.

Fresh from his hat-trick in the AFC Cup, in-form Liston Colaco, Manvir Singh and Udanta Singh can give some options but it's difficult to match Ali's ball control and precise passing.

It remains to be seen how Chhetri approaches this problem as they look to make it to the continental championship for the fifth time.

As for the defence, Sandesh Jhingan's match fitness would be under scanner as he along with Subhasish Bose will form the backbone of the team that has in the recent past drawn some criticism for conceding late goals.

Back to playing at home turf after almost three years, the biggest plus for India would be the strong home support.

Overnight the response has multiplied after Chhetri expressed shock and dismay that Kolkata generated a cold response for India's matches as estimated by the AIFF.

Estimating a low "response of no more than 5,000", the AIFF decided to distribute all tickets "complimentary" which would mean that they would not have to shell out hefty hosting fees (to the tune of Rs 16 lakh per match).

"Let the three teams that are going to play against us, play against us plus you, because that will be a massive difference," Chhetri once again urged the fans in a post in the social media, as the match is all set for an overwhelming response.

Eleven slots - six group toppers and five best runners-up - are up for grabs for the 24-team Asian Cup Finals.

Afghanistan will kick off the group D Asian Cup against Hong Kong in a 4.30pm match followed by India's at 8.30pm.