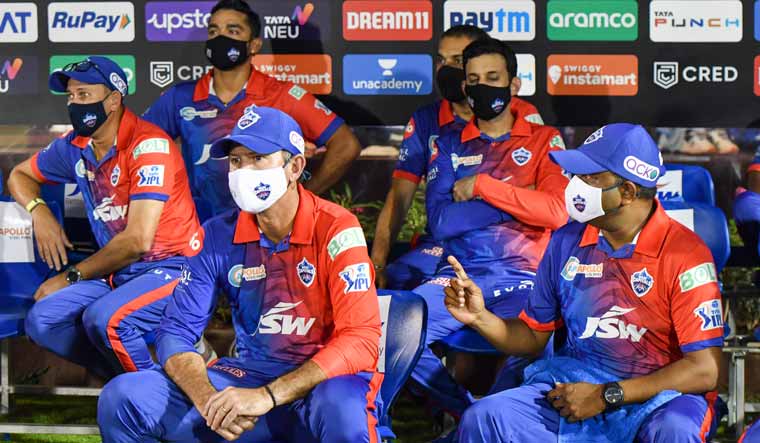 Delhi Capitals coaches Ricky Ponting, Ajit Agarkar and Praveen Amre and others sit at the team dugout, during the Indian Premier League 2022 match against Punjab Kings, at the Brabourne Stadium in Mumbai | PTI

A family member of Delhi Capitals head coach Ricky Ponting has tested positive for Covid-19, forcing him to go into a five-day isolation, the IPL franchise said on Friday.

Ponting, though, has tested negative for the virus, the franchise that has been battling a slew of Covid cases over the past few days announced hours before its IPL match against Rajasthan Royals.

The family has now been moved into an isolation facility.

"Ponting himself has tested negative twice subsequently. However, in the best interest of the team, the management and medical team has decided that he will remain in isolation for five days, as he was a close contact," the Delhi Capitals said in the statement.

"He will, therefore, not be present at the ground for tonight's game against Rajasthan Royals. The franchise requests for Ponting and his family's privacy to be respected in the current scenario," it added.

The condition of all individuals in the bubble who have tested positive so far is being closely monitored.

On Wednesday, the game between Delhi Capitals and Punjab Kings was played as scheduled after being rendered doubtful due to the emergence of a sixth Covid-19 case in the former's camp, with the bio-bubble breach raising some serious questions.

High drama unfolded in the lead-up to that game with Tim Seifert becoming the sixth member from Delhi contingent to test positive. Australian all-rounder Mitchell Marsh had tested positive on Monday.