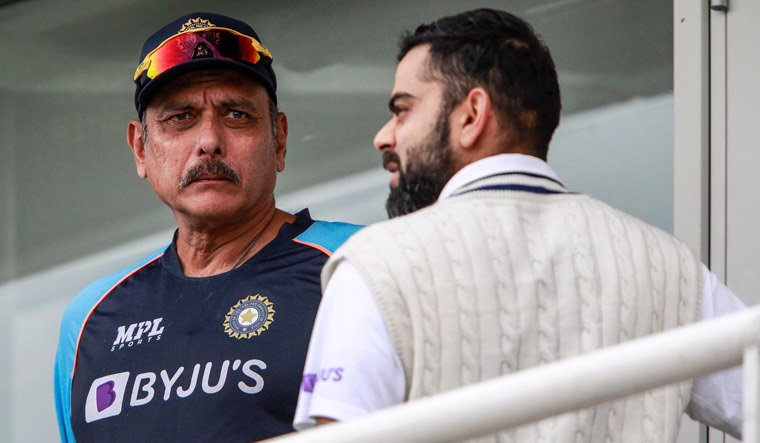 Batting stalwart Virat Kohli is mentally "overcooked" and needs to take a break from cricket in order to serve the country for at least another six-seven years, feels ex-India coach Ravi Shastri.

Kohli has been going through a lean patch with just two 40-plus scores to show in his last seven innings for Royal Challengers Bangalore in the current IPL season.

The 33-year-old from Delhi, who hasn't scored a century in the last 100 matches across formats, had stepped down from T20 captaincy both for India and RCB and also quit Test leadership, while he was removed from the ODI skipper's role.

Shastri feels the likes of Kohli need to be handled with care and empathy amid the COVID-19 restrictions, which have confined players inside bio-bubbles.

"I am going straight to the main guy here. Virat Kohli is overcooked. If anyone needs a break, it's him," Shastri told Star Sports.

"Whether it's 2 months or a month-and-a-half, whether it's after England or before England. He needs a break because he has got 6-7 years of cricket left in him and you don't want to lose that with a fried brain."

Kohli was out for a duck on Tuesday night as RCB rode on Faf du Plessis' 96 to claim a 18-run win over Lucknow Super Giants.

"When I was coach at the time when this first started, the first thing I said is 'you have to show empathy to the guys'.

"If you're going to be forceful, there is a very thin line there, from a guy losing the plot as opposed to him hanging in there and giving his best. So you have to be extremely careful."

Shastri said there might be one or two players in world cricket going through the same problem which needs to be addressed upfront.

Echoing the same sentiment, former England captain Kevin Pietersen said Kohli should take time away from the game as well as social media to rejuvenate himself.

"...the guy has had so much to deal with, from marriage to baby to media scrutiny and all on his personal life. He is the biggest star on show," he said.

"Virat Kohli needs to say 'cricket boots, for six months, I will see you later'. Turn off social media, go and get re-energised.

"When the stadiums are full again, you guarantee him a spot in that side for the next 12, 24 or 36 months. Tell him 'you're our guy, we know you'll deliver for us'."

Pietersen said Kohli "is going to find it very hard to continue delivering now as his brain is completely fried".