Dennerby said his players were infected by hotel staff 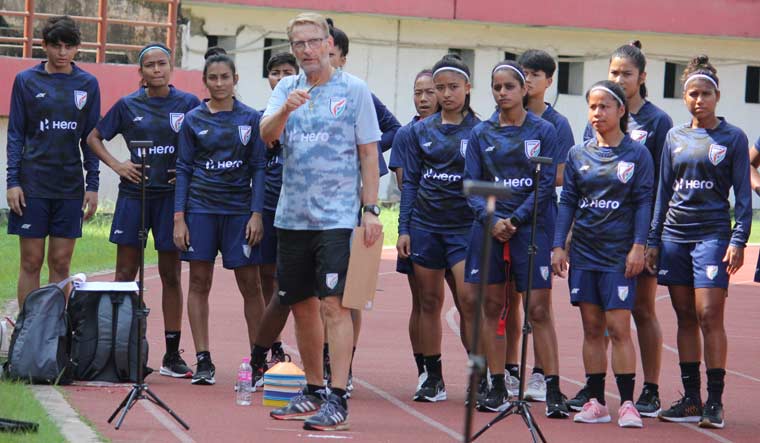 Indian women's football team coach Thomas Dennerby on Wednesday squarely blamed the AFC for the COVID-19 outbreak that led to the country's ouster from the ongoing Asian Cup here, alleging that his players were infected by the hotel staff in a bio-bubble that was not "foolproof".

In a scathing attack on the continental body, Dennerby said India's dream of taking a shot at the FIFA World Cup was shattered not because of any fault of the players but due to the weak bio-bubble created by the Asian Football Confederation (AFC).

He said the AFC did not show any "respect, compassion, empathy" to the team to deal with the "extraordinary" situation in such a high-stake tournament.

"We were all negative of COVID when we reached team hotel (on Jan 13) and after arrival tests. The first positive case came on the day we went out of the hotel for training and a day later (January 17), seven hotel staff tested positive. It is not rocket science to know how the outbreak came," he told PTI after a virtual media interaction.

"The first huge outbreak was among the hotel staff. From my point of view, it's very clear where it (COVID) started, it definitely did not start in the team. It came from the AFC bubble inside the hotel," he said.

"The hotel staff was tested for every six days and not every three days as done in case of teams. We know tests were conducted on hotel staff on Jan 11 and then on Jan 17 and seven positive cases were known on Jan 18. But the information was given only on Jan 19 afternoon. What was AFC doing for whole one day, we don't know."

India were forced out of the AFC Women's Asian Cup on Sunday after a dozen COVID-19 cases among their players led to the cancellation of a group match against Chinese Taipei minutes before kickoff here.

The AFC had said given the situation, Article 4.1 of the tournament rules came into effect, which made it clear that if a team failed to assemble for a match, it would be "considered to have withdrawn from the relevant Competition."

Dennerby said the AFC should have asked the infected hotel staff to leave immediately and not have any contact with players.

"We don't know why the AFC did not take immediate action. AFC should have called the hotel directly and asked the infected staff to immediately leave and not to have any contact with players," said the Swede who will also coach the Indian team in the FIFA Women's U-17 World Cup in October.

"Several hotel staff infected with COVID, including team India coordinator, kitchen staff, chef, housekeeping, service staff, all of them taking care of us, cooking and serving food, cleaning our rooms, while we were inside isolated in our rooms, still the AFC waited for a whole day."

He said since the COVID-19 breach happened at the bio-bubble maintained by the AFC, it should have found a solution.

"Honestly, we are not happy with AFC tournament organisation and lack of solution-oriented dialogue. In one way that destroyed our dream. We are not blaming the whole of AFC organisation, AFC is a good organisation in total.

"But since the COVID breach was not our fault, the AFC should have found out a solution. It was an exceptional situation and AFC could have taken steps like say postponing the matches by a few days.

"What really hurts us is that AFC is now trying to blame us and I think, that is a shame. The only answers we got when we tried to have a dialogue was that they were following article 4.1 of special rules."

The team started training on January 16 when there was another round of testing and one player returned COVID-19 positive.

There was another round of testing on January 18 and one more player and two support staff—team physio and strength and conditioning coach—were found infected with the virus.

Another round of tests was done on January 21 and it was known the next morning that the number of COVID-19 positive players had increased to 10.

Two players were injured—their bone fractured—and were on plastic cast. There were still 11 COVID-negative players left in the squad.

Then there were further tests and at 5:30pm before the Chinese Taipei match (January 23), two more players tested positive, taking the total to 12.

By that time, only nine players were COVID-negative, leading to the cancellation of the match.

Dennerby questioned why the AFC did not cancel the match on the morning itself when India did not have enough players (13 under rules) by then.

"If AFC already decided to send us out from this tournament, why do it this painful way, no respect, no compassion, no empathy (to) our feelings.

"Honestly, did AFC want (us) to look like fools bringing in two players in wheelchairs, is that showing the team respect?"