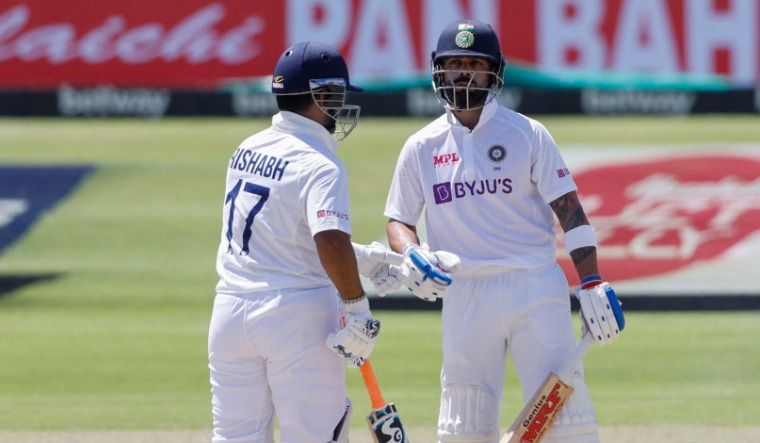 Rishabh Pant and Virat Kohli during their partnership on day three of the third Test against South Africa in Cape Town | Twitter: ICC

India's wicketkeepering batsman Rishabh Pant scored a quickfire half-century to help India wrest control from South Africa in the third Test by lunch on day three. India are on 130/4 with a 143-run lead.

India lost Pujara (9) and Rahane (1) early in the first session and were reeling at 58/4 when Pant walked in. Kohli, who has chosen to play it slow, has been a rock for the Indian side in this innings, as he was in the first innings.

Kohli is on 28 off 127 balls with a strike rate of 22, while Pant, in contrast, reached his 50 in 58 balls. The pair are frustrating the South African bowlers in contrasting fashion.

Earlier, Pujara was sent on his way thanks to a stunning diving catch by Keegan Petersen at slip, off a Marco Jansen delivery. Rahane was the next to go, the ball glancing off his glove to Dean Elgar.

Rabada and Jansen were in fine rhythm, having also picked up the two opening wickets yesterday. But Kohli and Pant held on.

With the match almost certain to have a result now, and evenly poised, the remaining two sessions of the day will determine which team will emerge with the upper hand in the series decider.