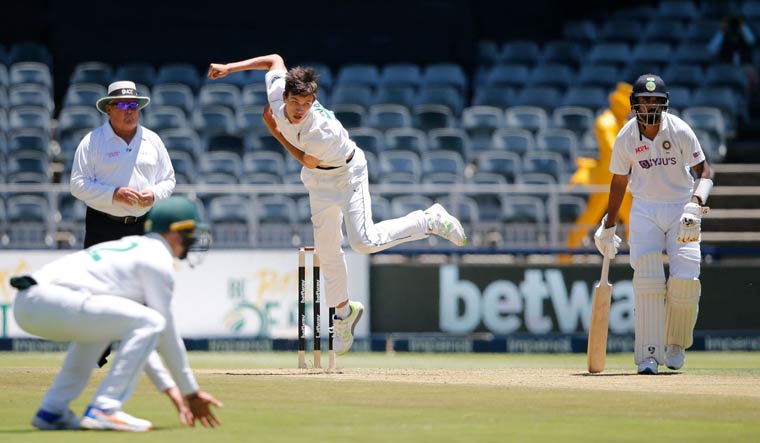 When a champion side scouts a player for three years before signing him, you know the player is indeed special.

When South Africa beat India by seven wickets today in the second Test to level the ongoing series 1-1, Marco Jansen was one of the standout performers for the hosts. The tall and lanky left-arm pacer took seven wickets to help the Proteas condemn India to their first defeat at The Wanderers in three decades.

Ironically, one of the memorable moments in the match was his mid-pitch verbal duel with Jasprit Bumrah, who was unnerved by Jansen's barrage of bouncers. The Indian pace ace is Jansen's teammate at Mumbai Indians in the Indian Premier League. The five-time champions had the over 2m-tall bowler on their radar for three years before finally signing him at the auction earlier this year for Rs 20 lakh.

Not many had heard of the 21-year-old until Mumbai Indians brought him onboard. From his 2/28 on IPL debut, against Royal Challengers Bangalore, to The Wanderers, the promising youngster has come a long way. Interestingly, Marco and his twin brother Duan were invited to bowl in India's practice session during the 2017-18 tour.

Jansen made his first-class debut for North West Province in the CSA 3-day Provincial Cup 2018-19. He also featured in the South Africa U19 team on a tour to India in January 2019. He was part of the Test squad which toured Pakistan earlier this year, but made his debut in Boxing Day Test against India.

Jansen started off as a batter, before switching to pace bowling. But he is no mug with the bat, having already scored five half-centuries in his short first-class career so far. In fact, as per his father Koos, Jansen scored 164 not out in an U9 school match, batting for 20 overs!

He also got his first call-up to the South Africa One-Day International squad for their three-match home series against India later this month. He will replace experienced pacer Anrich Nortje, who will miss the ODIs as well after being left out of the Tests due to a hip injury.