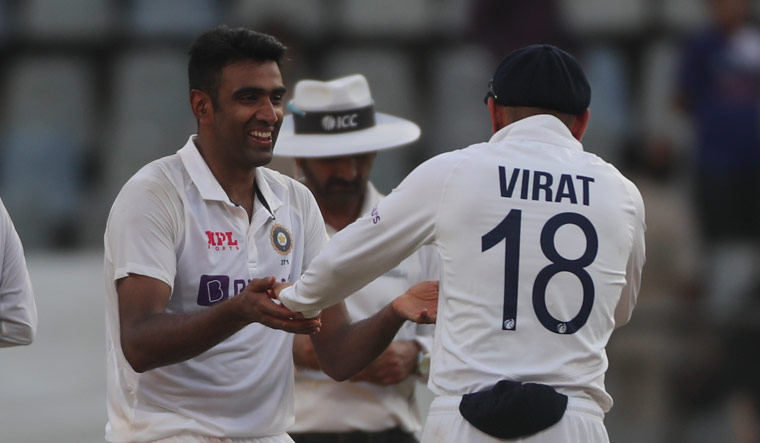 India wrapped up the second Test match against New Zealand by the first session of the fourth day with an emphatic 372-run win. Ravichandran Ashwin and Jayant Yadav picked up four wickets each in the second innings as India bowled out the Kiwis for 167.

With the win, India takes the two-match series 1-0 after the Test in Kanpur ended in a draw.

New Zealand were 140 for 5 at stumps on day three with an improbable 540-run target set by the Indians. India had declared their second innings at 276 for 7.

Despite the loss, the story of the match will be of New Zealand's left-arm spinner Ajaz Patel making history to become only the third man to take all 10 wickets of a Test innings, when he completed it by day 2. He followed that up with four more scalps in India's innings.

For India, Mayank Agarwal is the star of the match for his patient 150 in the first innings and 62 in the second, shining in the absence of regular openers Rohit Sharma and K.L. Rahul.

After India put up a total of 325 in the first innings, thanks to Agarwal, Mohammed Siraj and Ashwin rattled the Kiwi batsmen to reduce them to 62 all out in just the second day of the Test. From there, it was a matter of when, rather than if, India would wrap up the Test.

The Indian spinners took advantage of a wicket that began turning on day one, just like Ajaz Patel did. Jayant Yadav, who was drafted in the absence of R. Jadeja, made a good case for himself, taking four wickets in the final innings.

Ashwin ends the match with eight wickets, following up his Kanpur haul of eight. By day three and four, the wicket had plenty to offer the Indian spinners and New Zealand knew they had no way out.

With this win, India completes a successful tour after beating the Kiwis 3-0 in the T20I series. The team had come off a disappointing T20 World Cup, having failed to make the semifinals.

This is also coach Rahul Dravid's first series as head coach and he will be happy with the squad depth and the character his players have shown as top guns were rested over the course of the two format series.

India will next travel to South Africa for three Tests and two ODIs starting December 17.